Marriage on BBC One: 6 questions we have after episode one of Sean Bean and Nicola Walker drama

Marriage on BBC One: 6 questions we have after episode one of Sean Bean and Nicola Walker drama

Marriage, starring Sean Bean and Nicola Walker, has been touted as one the most critically-acclaimed dramas on the BBC this summer.

And the advance reviews on this engrossing, tender love story by Stefan Golaszewski were correct.

Unrushed and unflashy, Marriage is absorbed with the daily grind mundanities of family, love, work and loading the dishwasher.

Scenes are frequently very still, but precise. The cast are given so much space to breathe with their performances that breathing itself can seem the most demonstrative action on display.

Their characters’ time on screen is not filled with words, but the slow release of layered reactions coagulated with experience. 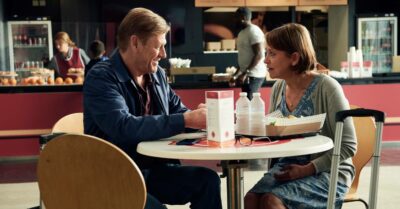 It you ever order a meal for Ian, don’t presume he wants fries (Credit: BBC)

For example, after one bruising exchange with her father Gerry – played by James Bolam – Nicola’s Emma nearly retains her fixed smile for a good 10 seconds as her expression subtly falls inwards.

It is a love story way past the getting to know one another or dating hijinks stages. Any flirting or playfulness is as familiar as discussing the impact of an upset tummy and holes in boxer shorts.

Intimacy includes scratching bare feet in stinky slippers plonked on the coffee table in front of one another. It is a love story rooted in 30 years of support, companionship, loss, joy and jacket potatoes.

We can’t wait to see how the four-part drama pans out – here are six questions we have after episode one of Marriage on BBC One. 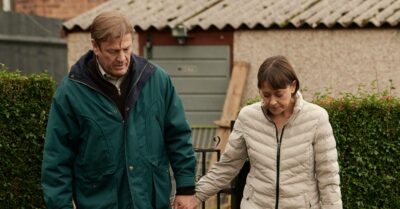 Ian and Emma make their way to a cemetery (Credit: BBC)

On their way to see Gerry, Emma told Ian she’d already said to her dad they were only dropping in, not stopping, because they were off to see Nicholas.

“We won’t stay long,” she repeated to her father, even before she sat down, or turned down the volume on Gerry’s TV, after arriving. Only a tiny pause before Emma said Nicholas’ name hinted there might be any difference between this stilted home visit and their next stop.

However, it seemed visiting Nicholas included graveside grieving. They took a card – which Ian had written, but Emma didn’t read – too. A later mention from their daughter Jessica saw her speculate ‘baby stuff’ is the reason her parents ‘don’t really talk’.

But words aren’t needed, or offered, as Emma and Ian hold hands, pick up litter, and then weep in the hissing breeze. Their grief isn’t entirely in step, however. Emma breaks down first, at one end of a bench. Ian follows, and for a few moments there isn’t any contact between them. The loss of Nicholas is clearly one they share, but suffer separately too.

Moments later, walking back to their car, the talk is of Jessica’s impending visit and sticky toffee pudding. But before the consolations of their to do list kicks back in, Emma hugs Ian. Nicholas is someone to interrupt their everyday for.

It wasn’t explicitly confirmed, but it seems Nicholas was Emma and Ian’s young son. It almost feels wrong to intrude on their grief… but what happened to Nicholas? 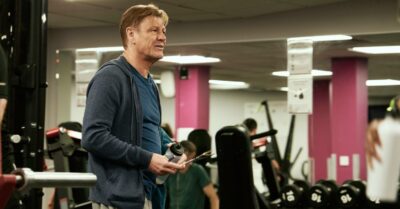 Ian seems a little out of place as he tries to fill the hours (Credit: BBC)

Are Ian and Maxine connected somehow?

Initially, sloping around the gym in a hoodie that looked more like a cardigan, recently-redundant Ian looked ill at ease.

At that point, his forced chit-chat with Maxine – who barely looked up from her computer as she signed him in on reception – made Ian look a little lonely, rather than intrusive.

But she became uncomfortable with the attention. And his attempts at engaging her with comments about “building up a sweat” seemed clumsy, at best.

Ian knew he had upset her, and knew she’d faked out of having to continue speaking with him. And yet he returned to engage with her again – even asking her colleague what time her next shift was.

He then hung around the leisure centre car park for a bit, binning the occasional bit of litter. Viewers were also given a glimpse of Maxine’s personal life as she attended her own engagement drinks in a pub.

Will Maxine return in later episodes? And, even though he appeared on the verge of bothering her, could Ian and the much-younger Maxine have an undeclared connection? 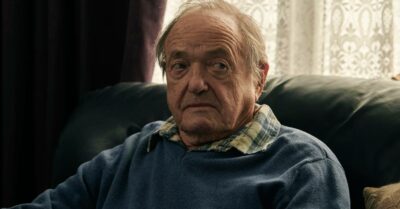 Gerry doesn’t have much to say… until he does… and then he’s withering (Credit: BBC)

Why did Gerry accuse Emma of ‘abandoning’ him?

Gerry had seemed disinterested rather than irked when Emma offered details on her holiday. Not that there was much detail. It was more like she was speaking a few words to fulfil conversational duty. It wasn’t that she wasn’t willing, but Gerry’s terse responses were a block to their catch-up being anything but rudimentary.

However, following a few words about the pool and the sea and the food, Gerry suddenly got more talkative.

“How can you honestly ask me if I’ve had a good time when it was you who abandoned me?” he asked. This answer was a little more thorough – and wounding – than the previous surface-level interactions.

Emma’s expression, after smiling hard throughout as she tried to drag a reaction out of her father, slowly collapsed. Were Gerry’s pointed remarks spiteful and throwaway, an example of how manipulative he is?

Or were they based on anything specific that may have happened before that he punishes Emma for? 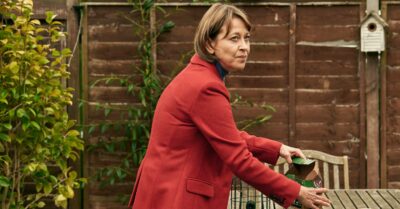 Emma’s brother seems to have an issue with her (Credit: BBC)

Why does Emma’s brother resent her so much?

Emma’s brother hid away upstairs when Emma and Ian arrived. He also tided away his mug in order to cover up his presence. However Ian later realised he was about when he heard a door bump. And his lack of surprise indicated it wasn’t unusual for Emma’s brother to retreat from seeing her.

After Emma and Ian left, her brother slunk back downstairs and found reasons to carp about her to their dad. However Gerry, in a surprising shift of family dynamics, resolutely took Emma’s side.

Responding to a moan about how many cigarettes Emma had brought back, Gerry hit back: “You always see the worst in her.”

“She has to be the victim,” her brother, a grown man, sulked.

Was all of this due to a simple sibling rivalry that has festered over time? Or is there another reason why there is so much distance between Emma and her brother? 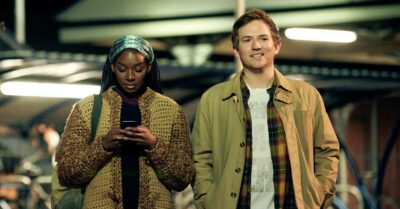 Jessica is wowed but Adam appears to be manipulative (Credit: BBC)

Will Jessica and Adam’s relationship last?

It seems unlikely. Jessica may lap up Adam’s pandering about her being “a wild spirit in a world of conformity” but Emma and Ian saw right through him.

“I don’t want to talk to him,” Ian chuckled out of earshot within moments of meeting his daughter’s pretentious record producer beau.

“I hate his [blank]ing face,” Emma later put it, as they deconstructed the evening.

Limp and insincere about their house and their potatoes, Adam was prone to believing his platitudes were insightful.

“Change can be hard for people,” he offered affectedly as Ian reflected on losing his mother and his career.

His passive-aggression also revealed itself as he tried to keep it light, as people do when introduced to a partner’s family.

“I heard you the first time,” Adam snapped at Ian after being offered cashews for a second time.

“How many times do you need to say goodbye?” he strained as the the farewells went on and on on the doorstep.

But even though an overawed Jessica gushed about her “clever” and “unique” man, she knew something was off.

She no longer drinks because of Adam. He talks about marriage a lot. And he jumped ahead of her to take seconds of salad which he didn’t even touch.

But most worrying of all was how Adam gaslit her into accepting Ian may be threatened by him.

“I promise I won’t side with him. I’m all yours, I’m completely yours,” she vowed. 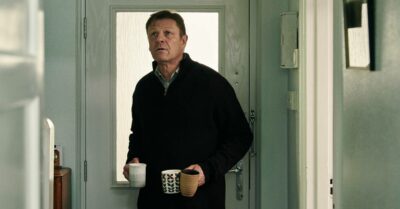 Ian hears Emma’s brother upstairs but doesn’t make anything of it (Credit: BBC)

Why is Ian so particular about jacket potatoes?

Ian’s excruciating – and disconcerting, as he snarled at Emma – obsession with jacket potatoes brilliantly illustrated his denial. As he became increasingly flustered about flying, he took it out on Emma – and the substitute fries she provided were to blame.

But jacket potatoes weren’t confined to that superb opening scene in which Ian unravelled more than might be expected with the post-holiday blues. He was back on the baked spuds when Jessica and Adam came to dinner, too.

Just how many will he consume during the four episodes of Marriage?

Marriage continues on Monday August 15 at 9pm on BBC One.  The third episode airs next Sunday, August 21, at 9pm.