Coronation Street is bringing back a major villain in a shocking autumn twist.

Actor Will Mellor has filmed scenes as killer Harvey Gaskell which are set to air later this year. 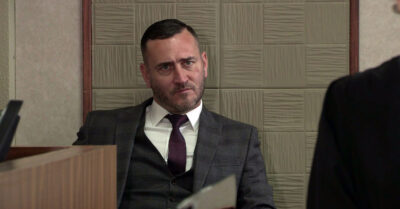 Will Mellor is returning to Coronation Street as Harvey Gaskell (Credit: ITV)

His reign of terror came to an end in the Super Soap Week stunt as Leanne crashed a car knocking him out before the police arrested him.

But before that he had shot Natasha Blakeman in a case of mistaken identity.

The mum tragically died of her wounds, leaving son Sam behind.

It hasn’t been revealed yet how Harvey will return but the Metro reports that hints will be seen on screen in the coming weeks.

Meanwhile actor Will is set for a very busy autumn after signing up for Strictly Come Dancing.

After the news was announced, Will revealed he was “chuffed” to be joining the show, now in its 20th year.

“I’m honestly so chuffed to be taking part in Strictly Come Dancing this year! “Not going to lie, it’s totally out of my comfort zone.”

“I know it will be a huge challenge but that’s what life is all about,” he also said.

Will added: “This is also my mum’s favourite show and she’s had a really tough few years so I’m doing this is for her as well. Bring it on!”

Speaking on BBC Breakfast, Will revealed that his dad’s death spurred him on to sign up for Strictly.

He said: “My mindset completely changed a while back and I wanted to start doing things that scare me a bit.

“I lost my dad in 2020 and I just thought, I’ve got to grab life and do things, create new memories. My mindset changed.”

Leave us a comment on our Facebook page @EntertainmentDailyFix and let us know if you are looking forward to seeing Coronation Street with Will Mellor again.