Naga Munchetty had viewers all saying the same thing about her dress as she presented BBC Breakfast on Friday (August 12).

The presenter and journalist, 47, sported a chic bright orange dress with a collar, four pockets and brown buttons.

While Naga certainly looked gorgeous, many fans felt that her outfit looked like a waitress uniform.

Taking to Twitter, one person said: “#bbcbreakfast Why is Naga dressed like a waitress from a 1950’s American Diner?”

A second wrote: “Looks like they’ve pulled a waitress out of Naga’s Diner this morning to present #BBCBreakfast.”

“Naga Munchetty looking like a waitress in a diner #BBCBreakfast,” another commented. 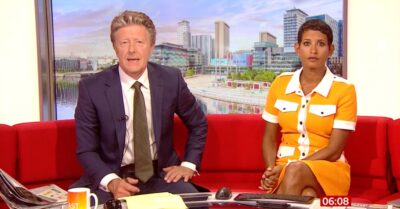 And a fourth user tweeted: “@BBCBreakfast sorry to moan the waitress in orange uniform @TVNaga01 took my order for scrambled eggs on toast and mug of coffee and I’ve not seen her since… sorry Naga couldn’t resist it x.”

During the show, viewers also saw Naga engage in a conversation about the living cost crisis with MP Jonathan Reynolds.

However, many fans didn’t like how Naga questioned the labour MP.

The MP began: “We’ve been setting out for quite some time responses that match the scale of the crisis people are facing.

“We’re going to respond with interventions that make a difference to people. So as well as what we’ve already laid out with that windfall tax.” 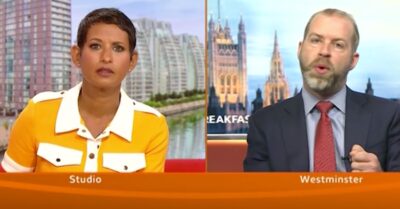 Responding to the MP’s claim that interventions to stop families from getting charged more will be worth about £200 extra by next year March, Naga said: “BBC’s research department took a look – if you look at this, actually, a prepayment customer would save £46 on this, it barely touches the sides whether it’s £200 or £46, does it?”

One person tweeted: “Here we go again #naga this time attacking the opposition for the crisis caused by the current govt #bbcbias #bbcbreakfast.”

However, another said: “Well done Naga. Your like a Rottweiler when you want those facts.”