First Dates star Fred Sirieix has revealed his daughter, Andrea Spendolini-Sirieix will be competing in the diving European Championships in Rome next week.

The honoured father shared the exciting news to his fans via social media.

Fred tweeted: “Andrea and her TeamGB fellow divers have just landed in Rome for the diving European Championships. The competition will start next week.”

One twitter fan wrote: “You must be so proud. I know we are for her and the team too!”

Another twitter fan added: “Good luck to Andrea and #EAMGB. It was amazing to watch her in the CommonwealthGames2022. Such an amazing diver. You must be so very proud.”

A third wrote: “Good luck Andrea and @TeamGB they smashed it at the Commonwealth Games.”

The TV star has also shared information on his social media on how the game can be watched.

He captioned the post: “Quite simply the cleanest and softest water I have ever swum in. So much so that it felt like a caress on my skin.”

One user wrote: “I am sure your daughter will be commenting on the quality of that dive. Congratulations to her for a stunning performance. A future Olympic medal winner.” 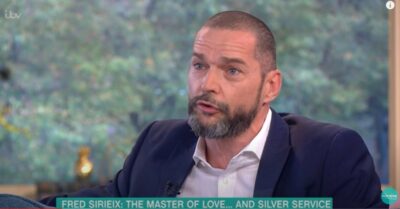 The 17-year-old has already earned a silver medal in the 10m synchronised platform competition along with gold in the 10m platform diving event at the Commonwealth Games.

Andrea previously told the BBC after the mixed synchronised 10m platform: “We came in wanting to have fun and we definitely did. I’m just really pleased with how we executed our dives and our overall synchro. It’s been really really fun.”

Fred, 50, has proudly shown his support standing on the side lines.

He took to Twitter and shared a message along with a video of Andrea emerging from the pool after winning in which you could hear Fred cheering away. 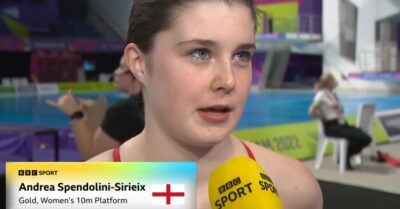 The television star has constantly kept fans updated through his social media and has expressed that his daughter’s diving was ‘poetry to watch’.

Mark England, the team boss of England, praised Andrea as he said: “Take someone like Andrea, 17 year old and two gold medals. It’s quite daunting for somebody of that age to have all of this noise around.

“It’s been extraordinary to see how the youngsters have not just performed on the field of play but also coped with the pressure of a home Games.”