In Coronation Street spoilers for next week, Zeedan and Alya go to great lengths as they battle to clear Stu‘s name.

Following Stu’s arrest after he went into No.6 to retrieve his watch, it appears as if he will never get a chance to explain himself to Yasmeen. Furthermore, the revelation he is a convicted murderer has hardly endeared himself to Coronation Street‘s residents.

Quick heads up – there are even more Coronation Street spoilers for you in Entertainment Daily’s dedicated preview section, so you can get your fix before episodes are on the box. 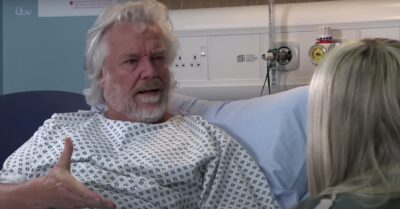 Stu hasn’t made a tough situation any easier for himself with his actions (Credit: Coronation Street YouTube)

Stu has already made an awful situation worse by alienating himself from Kelly after she tried to support him.

However, it seems Stu may have other allies in Zeedan and Alya – even though it is their gran who has cut him off.

In Monday’s (August 15) episode, Zeedan learns the detective Stu accused of stitching him up is no longer a copper. Apparently, according to Craig, he took early retirement and his reasons for doing so weren’t very convincing.

Meanwhile, both Yasmeen and Zeedan receive letters from Stu, begging them to visit him in prison. Yasmeen, however, rips Stu’s correspondence up and bins it. 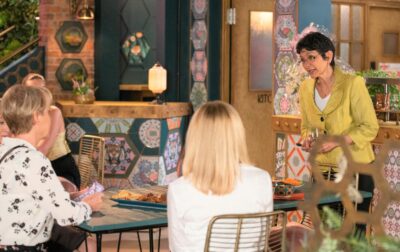 During Wednesday’s (August 17) visit to Weatherfield Craig reveals Stu could be released within days.

Yasmeen ploughs on to deliver a speech about domestic abuse to the guests at the fundraiser. But she is still affected and suffers a panic attack, struggling to breathe.

Zeedan, meanwhile, waits for Stu in the prison visiting room. Stu tells him his police case files contain the key to proving his innocence.

Zeedan later asks Adam for some legal help – and to request Stu’s case files. However, this information leaves Yasmeen reeling and leads to a confrontation between them.

During this escalation of tensions, Stu calls Zeedan and begs him to pass the phone to Yasmeen. Will she take it? 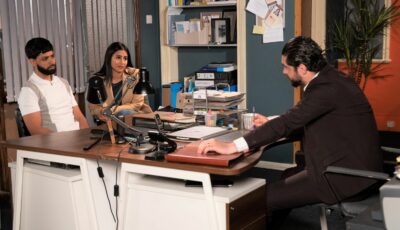 Adam gains access to the files – but it will cost Zeedan, and maybe Alya too (Credit: ITV)

On Friday (August 19), viewers will see Adam tell Zeedan he can have access to Stu’s case files – but it comes at a price. Zeedan will have to stump up £1200 for them.

Zeedan pressures an unsure Alya to help him do right by Stu and split the cost of the legal fees.

If he does manage to persuade her to contribute, what will those files reveal?