During the tributes segment, Richard Madeley opened up about one of his biggest ‘regrets’ over the late Hollywood star. 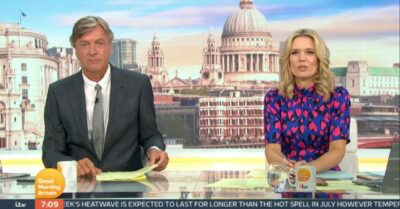 On Monday, it was announced that Grease star Olivia Newton-John had sadly passed away aged 73.

She passed away in her California home after a battle with breast cancer.

During today’s edition of Good Morning Britain, Richard and his co-host, Charlotte Hawkins, spoke about the late star.

During the segment, Richard and Charlotte welcomed Jane Seymour on to the show, who was a close friend of the late Olivia.

It was during this interview when Richard opened up about his regret over the star. 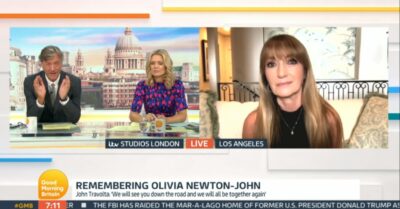 Jane Seymour was on the show today (Credit: ITV)

Speaking about the late star, Richard said: “I wish I’d met her, I wish I’d interviewed her – it never happened.

“I always regretted it actually as the years went by.”

He then went on to speak about a picture of Olivia that was on the wall in the radio station he used to work at.

“I’m not exaggerating, it basically stopped traffic in the corridors,” he continued.

He then went on to say: “It was up there for months and even after months, the guys would just stop and look at it.

“And (they) just get lost in her beauty and I would have loved to have told her that.”

‘She was a special person…She changed the world.’

She recalls her fond memories of Olivia and their friendship. pic.twitter.com/wU57W9KncI

Viewers were less than impressed with Richard’s tribute to the Hollywood legend.

“Richard Madeley asking some daft questions about ONJ, no wonder she never gave him an interview,” one tweeted.

Meanwhile, others paid tribute to Olivia as one said: “Olivia Newton John, 73 is too young. She deserved more.”

Another wrote: “So sad to hear of ONJ’s passing.. she was an iconic piece of the jigsaw of my adolescence!”