Jane McDonald’s Cruising With show takes her all over the globe, but not many of her trips are as moving as her recent visit to Capri.

It saw Jane getting emotional as she felt so “close” to one of her old heroes.

The TV star was sailing around the Mediterranean for her programme Cruising The Med and got to see the island where late actress and singer Dame Gracie Fields is buried.

The presenter was actually stopping in Naples in Italy but took a little detour over to see Capri. 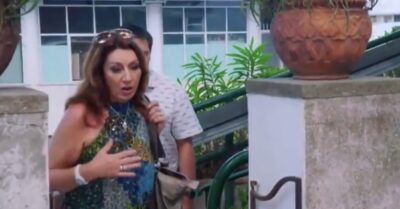 The 59-year-old was overwhelmed to be there.

She revealed that she had always wanted to see where the late legend lived.

“Ain’t it pretty, I didn’t expect this!” she gushed.

“I don’t know what I expected from Capri, but it wasn’t this!”

Star emotional as she met superfan

The fan gave her some titbits about the late star, including that she had set up a restaurant on the island. 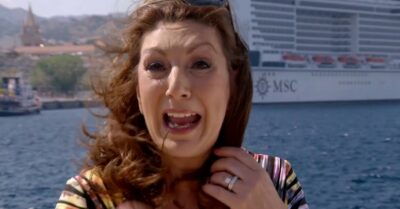 The star was moved (Credit: Channel 5)

He explained that when she passed away, the waiters from her restaurant carried the coffin to its burial place, which the celeb was able to visit.

The screen then displayed a black and white image of the touching moment.

Struggling to hold back her tears, Jane gasped as she stood and looked at her hero’s resting place.

Her voice trembling, she said: “Oh, bless, bless her.”

She explained: “Gracie has been woven in and out of my life for quite some time, and to actually be here and pay my respects, I feel very close to her right now.”

Who was Gracie Fields?

Dame Gracie was an English actress, singer and comedian and was a huge star in the 1930s.

Her movies included Shipyard Sally, The Show Goes On and Molly Ands Me.

Cruising with Jane McDonald is at 5.40pm on Channel 5 on Sunday (August 7).

Are you a Jane McDonald fan? Tell us on our Facebook page @EntertaimentDailyFix.