Ant McPartlin has celebrated his first wedding anniversary with wife Anne-Marie by sharing an unseen picture from their wedding.

Anne-Marie and Ant tied the knot on August 7 2021, with Ant’s presenting partner Declan Donnelly of course acting as best man.

Now, one year on, Ant has shared a new picture from the idyllic wedding. 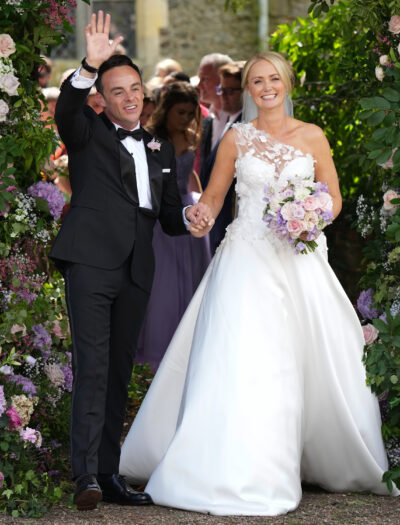 The popular presenter and wife Anne-Marie are beaming in the new picture, which offers a behind-the-scenes glimpse at the wedding.

Ant uploaded the snap earlier today (August 7) and it shows the pair smiling as they hold hands.

This is SO cute! Happy anniversary beautiful humans.

The TV star also shared what appears to be his nickname for Anne-Marie in the caption of the upload.

“Such a beautiful couple,” cooed one.

“This is SO cute! Happy anniversary beautiful humans,” another said.

A third said: “First year has flown by, happy anniversary to you both, have a lovely time celebrating.”

“Wow that’s gone fast, so wonderful to see him happy,” said another.

“Happy Anniversary and may you have very many more,” said another.

Ant and Anne-Marie tied the knot at St Michael’s Church in front of family and famous friends.

Phillip Schofield, David Walliams, Christine Lampard, Cat Deeley and of course Declan Donnelly were all on hand to wish the happy couple well.

Afterwards, the guests headed to the swanky Heckfield Place hotel to celebrate the union.

At the reception Ant made a sweet speech, paying tribute to Anne-Marie’s daughters.

He also revealed that Poppy and Daisy call him “Dad”.

Ant is said to have told guests: “I’m grateful they call me Dad.”