Meghan Markle reportedly had “problems” on her wedding day after allegedly being “very rude” to an army officer.

Speaking on Pod Save The Queen podcast, royal author Tom Bower claimed that Meghan, 41, had “problems” with her veil when she arrived at St George’s Chapel.

He then alleged that the army officer on duty didn’t try to help due Meghan reportedly being rude to him the day before. 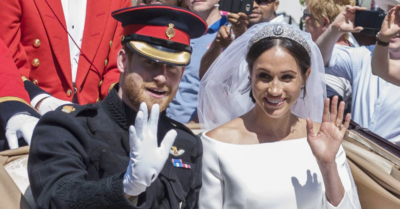 Royal author claims Meghan had ‘problems’ after being ‘very rude’

The author of Revenge claimed: “A military man told me an extraordinary story about Meghan when she arrived at the wedding at Windsor Castle on that glorious day in 2018.

“You see her get out of the car unaccompanied and she has problems with the train of her dress and the army officer doesn’t step forward to help her.

Read more: Meghan Markle to ‘receive poignant gift from Prince Harry’ as she celebrates her birthday

“And the reason is, the day before in the rehearsal, she had been very rude to him so he thought, well I’m not going to help you today,” he alleged.

He continued: “I didn’t get the story from him but a fellow officer of his who explained what happened.” 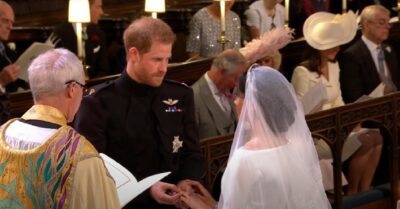 Meghan and Harry tied the knot in 2018 (Credit: YouTube)

The Duchess of Sussex tied the knot with Prince Harry in 2018 at St George’s Chapel, Windsor Castle.

Her veil, which was over 16ft long, had 53 flowers to represent the Commonwealth countries.

Meghan’s dress and veil was designed by Clare Waight Keller.

In Meghan and Harry’s 2021 Oprah interview, the duchess revealed that the couple had exchanged vows with the Archbishop of Canterbury three days before the wedding.

However, it was confirmed that their private exchange of vows was not legally recognised.

Tom has made many claims about Meghan Markle

Tom has made many claims in his book Revenge.

The claims include Meghan allegedly making Kate Middleton cry at the fittings for bridesmaids.

Meghan denied making Kate cry and alleged that Kate was the one who made her cry but had since apologised.