Naga was hosting alongside Charlie, with the pair going through the day’s papers at the start of the show.

The apology came after Naga inadvertently made a cheeky innuendo aimed at Charlie. 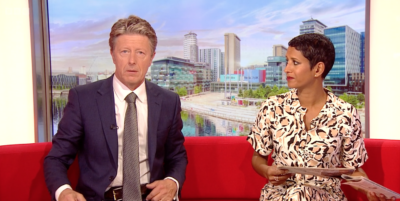 The quip from Naga came when she asked Charlie what story he’d prefer to cover next.

He was offered the choice between a newspaper report about “danger” and one about crabs.

Except the way Naga asked Charlie sounded really quite rude and left her in fits of giggles.

She said: “What would you rather have, a danger story, or crabs?”

Charlie then broke his silence and corrected Naga.

“A story about crabs I think is the answer to that,” he said.

Turning to the newspaper report, she then attempted to compose herself.

However, not before one final giggle as she quipped: “Okay, crabs, you asked for crabs… here are crabs.”

“I asked for a story about crabs,” Charlie stated once more, causing Naga to giggle again. 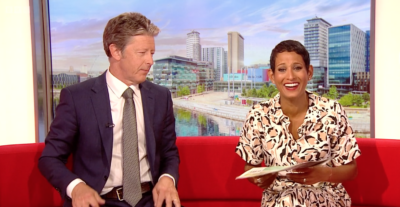 Yet another crabs apology!

She then proceeded to detail a story about the crabs that were gathering on a beach in St Ives in their droves.

Naga then issued yet another apology as she attempted to pronounce the name of the beach that they had descended on.

“Sorry to anyone who lives there if I pronounce this wrong,” she said, referring to Porthgwidden Beach.

Last month, Naga was forced to apologise to guests on the show after she laughed during a discussion about cancer.

However, luckily for the BBC Breakfast host, the guest also saw the funny side and told Naga: “We’ve done a lot of laughing in the last three years, we really have because you’ve just got to see the funny side of things.”