Loose Women star Coleen Nolan joked that she could appear alongside Jodie Prenger on Coronation Street at her long-lost sister.

The panel show host was given the idea by Ruth Langsford on today’s show on which Jodie, who arrives as chaotic Glenda Shuttleworth this week, was a guest.

Jodie and Coleen, who have known each other since childhood, were joking about their IRL sisterly-bond when Ruth had the brainwave. 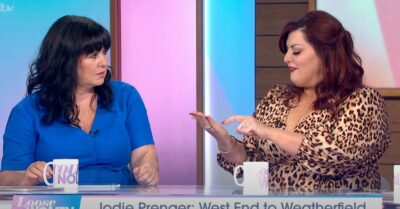 Could Coleen be heading to Weatherfield? (Credit: LooseWomen/YouTube)

When is Jodie Prenger in Coronation Street?

The former This Morning host said: “Do you know what? Maybe there should be a story where your long-lost sister comes back from somewhere.”

Jodie, keen on the idea, said to Coleen: “Well my mum went to school with your sister anyway. We must be related.”

An amused Coleen replied, saying: “How funny would that be?”

But Ruth wasn’t messing around, adding: “No, not funny. I think that would be great.”

Coleen seemed to laugh off the idea, turning to Jodie and saying: “If you could phone them to tell them I’m not auditioning though!” 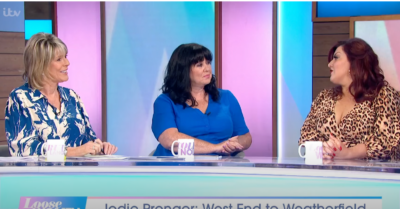 Ruth was rather taken with her idea (Credit: LooseWomen/YouTube)

Ruth continued: “Imagine if you were walking onto the set now. I’m bigging you up.”

She then asked her what her name would be to which Gloria Hunniford suggested ‘Maisie’.

Coleen looked uncomfortable being the centre of attention though, so don’t expect to see her on the cobbles any time soon.

It was announced in June that Jodie would be joining the cast of Corrie as regular character George Shuttleworth’s sister.

Jodie, who rose to fame on I’d Do Anything in 2008, will first appear on-screens this Friday (August 5).

Glenda is a cruise ship singer who arrives in Weatherfield following a row with her boss.

She isn’t out of work for long though, soon landing a job behind the bar at the Rovers.

Speaking at the time about her casting, Jodie said: “I know I sound like a soppy sod, but it’s been on my bucket list to be in Coronation Street since I was little.

“It’s an honour, it truly is a very special moment in my life. 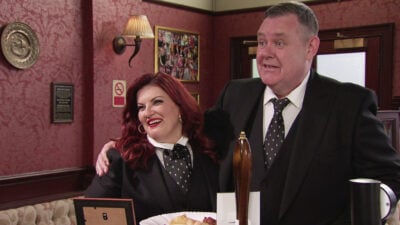 Glenda arrives on the cobbles this week (Credit: ITV)

“To be part of something my family and I have loved for so long. And what a character, oh I have to say, total dream part.

“I can’t wait for you all to meet fun and sassy Glenda, George Shuttleworth’s sister.”

She added: “I love Tony Maudsley already, what a fella! Your first day on the cobbles is one of the most nerve wrecking experiences you’ll go though and everyone was just so gloriously lovely, kind and welcoming.

“It was, and is, everything I expected, and more.”

Producer Iain MacLeod said: “Glenda sails in fresh from the cruise ships with a whiff of the exotic, quickly making best friends and enemies in equal measure.

“The character is loads of fun and has echoes of classic Coronation Street females of old.

“Jodie is a fabulous talent and we are all very excited to have her aboard.

“She has felt very Corrie since the moment she stepped onto set and I think the viewers will love her.”