Prince Harry and Meghan Markle are in danger of ‘burning out’ their royal status and could see themselves ‘forced’ to give up their titles, a royals biographer has warned. 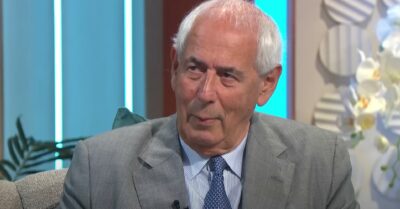 Who is Tom Bower and what is he saying about Harry and Meghan?

He alleged: “They are constantly searching for new things to do. But it always comes back to the royals.”

He used the example of the Duke and Duchess of Sussex flying back to the UK to be pictured with the Queen during her Platinum Jubilee celebrations, which he claims ‘went wrong’.

Palace aids reportedly stopped the couple from taking photos with the 96-year-old monarch for their Netflix show.

Bower warned that the Sussexes constantly falling back on the Royal Family will no longer wash soon.

He added: “I think they’ll in the end have to give that up because it won’t wash well.”

The Sussexes visited the UK in June (Credit: Splash News)

This comes after revelations made by Mr Bower last week to the Mirror’s Pod Save the Queen podcast.

The author made claims that Meghan and Harry tried to get better seats for at the Thanksgiving service at St Paul’s Cathedral.

But they weren’t sat near the more senior royals such as Harry’s dad and brother, Prince Charles and Prince William.

Meghan, Harry and the War Between the Windsors

Mr Bower told the podcast: “And then as they walked down the aisle, they get to the seats in the row they are assigned and I’m told they then asked six other people sitting this side of the aisle could they move down so they could sit on the aisle itself.

“And the usher apparently said to them: ‘You can’t. You’re sitting in seats eight or nine’ or whatever it was and Harry said: ‘Why?’

“And the usher said: ‘That’s what your grandmother ordered.’ I’m told that from a military man.”

The Sussexes flew to the UK back in June as the Queen celebrated 70-years on the throne.

It was a flying visit but Her Majesty finally got to meet her one-year-old great-granddaughter and namesake, Lilibet.