Lorraine viewers have hit out at stand-in presenter Ranvir Singh for constantly interrupting guests on the show today (August 1).

Ranvir has stepped into regular host Lorraine Kelly‘s shoes while she takes a well-earned summer break.

But Ranvir, who regularly presents the show when Lorraine is away, is rubbing fans up the wrong way.

She even had viewers switching over to watch Jeremy Vine on Channel 5 instead. 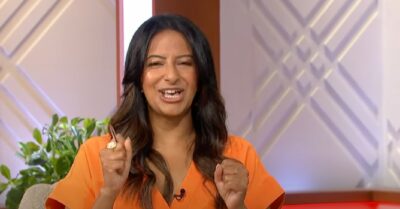 What were Lorraine viewers saying about Ranvir Singh today?

Viewers took to Twitter to vent their frustration at Ranvir’s habit of talking over her guests.

“Ranvir is just so frustrating always talking over the guests,” one user of the social media site fumed.

Another agreed, tweeting: “As Ross King just said ‘Ranvir Directing her own show’. Shouting over everybody as usual. Enough for me Vine it is.”

A third branded the host rude, saying: “Can you please give Ranvir something for verbal diarrhoea and compulsion to talk endlessly over guests then butt in. She’s rude.”

“Please ask Ranvir to stop interrupting the guests when they are speaking it drives me mad! I want to know what they were going to say!” said another.

And a fifth viewer said: “Please tell your presenter today to stop interrupting people when they are talking. Was trying to listen to the exercises but Ravi (sic) kept talking over the tutor.”

Ranvir is just so frustrating always talking over the guests 😤#lorraine

Please ask Ranvir to stop interrupting the guests when they are speaking #Lorraine it drives me mad! I want to know what they were going to say!

@lorraine Please tell your presenter today to stop interrupting people when they are talking. Was trying to listen to the exercises but Ravi kept talking over the tutor 😡. #lorraine

Ranvir is on hosting duties all summer

Sadly, there wasn’t a lot of love for today’s (Monday 1 August) show on Twitter at all.

Aside from complaining about Ranvir, fans vented about the show covering the exact same stories as Good Morning Britain, which airs before it on ITV.

“Basically a repeat of GMB, recycled stories of the morning,” one viewer moaned. 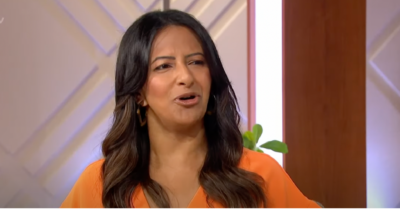 Meanwhile another lamented over Lorraine Kelly barely being on her eponymous show anymore.

They said: “Not that I’m complaining but when was the last time Lorraine was on Lorraine maybe rename it ‘whoever’.”

Even Ranvir’s interview with footballer Lianne Sanderson about last night’s amazing England win against Germany in the Euro 22 final wasn’t enough to pull viewers out of their slump.

“I don’t much care what Adele thinks about the lionesses tbh why is it relevant?” moaned one person.

Ranvir is sharing hosting duties with Christine Lampard until September – news which has pleased some viewers.

“Love you Ranvir,” one commented.

“So good to see you and Christine on Lorraine,” said another.

A third added: “My dream woman!”