Ricky Champ has revealed his baby son’s name and why he and his wife Sammy favoured it.

The EastEnders star and his partner welcomed a baby boy on June 23. He was two weeks early and arrived via C-section.

In an interview with OK!, Ricky revealed that his son’s name is River. 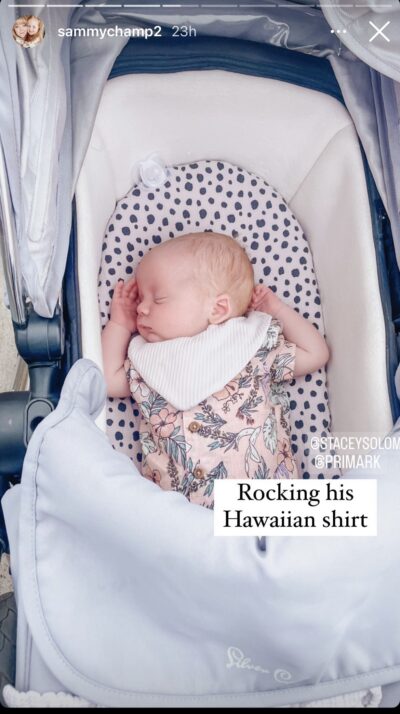 Mum Sammy is ‘transported’ back to when she had Beatrix when she looks at baby River (Credit: Instagram)

Ricky has played tough guy Stuart Highway on EastEnders since 2018.

Ricky married sweetheart Sammy in 2016 and had their first child Beatrix a year later.

He then announced in January that the couple was expecting their second child.

Why did they name their baby River?

In the interview, Ricky revealed how the name came to be.

It’s cool and a bit hippie.

He started by saying, “River felt right. We didn’t go through a book of baby names – we’ve always prided ourselves on our naming skills.”

He then explained that their four-year-old daughter, Beatrix, began to call the baby River before he was even born.

“We told Beatrix about the name River, and she started calling him that to Sammy’s tummy, so we were kind of locked in. But we love it – it’s cool and a bit hippie.”

Mum-of-two Sammy told OK!: “He looks so much like Bea. It’s all I can see when I look at him. I’m transported back in time to when she was born.”

Ricky’s wife shared an adorable picture of baby River on her Instagram on July 23 to celebrate him being one-month-old.

The caption said: “I’m so happy you were early, and we’ve had a whole month of you already, sweet boy.”

She has shared multiple pictures of the new arrival on her social media and has been receiving lovely comments such as: “Such a beautiful boy Sammy.”