Anne Hegerty has opened up about how she got the cheeky nickname given to her by The Chase‘s Bradley Walsh.

Quiz star Anne is known to millions of viewers for her persona as The Governess on the ITV quiz show.

But the much-loved TV personality, 64, is also known by another moniker. Or rather, the character she plays on the box is…

But it seems beyond imagination that any contestant – or another Chaser, even – would dare refer to her by it on air. 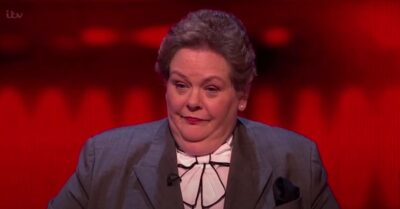 Anne Hegerty on nickname given to her by Bradley Walsh

Asked about how she came to be called ‘Old Frosty Knickers’, Anne had a surprising reaction to that which fans might expect.

She also revealed further background information when asked about another aspect of production.

Anne responded on Twitter this afternoon (Sunday May 31) by noting she is a fan of her silly alter ego.

She explained: “Bradley called me it one day in rehearsals, and I thought it was funny and encouraged him.” Anne approved of the nickname Bradley gave The Governess on The Chase (Credit: The Chase YouTube)

Anne Hegerty on how The Chase is produced

The social media user who made the enquiry then pondered further.

I thought it was funny and encouraged him.

“Rehearsals? You rehearse for a quiz show? I’ve never heard of that before,” they replied.

And Anne went on to note why run throughs had been necessary. However, she didn’t clarify whether rehearsals still happen. 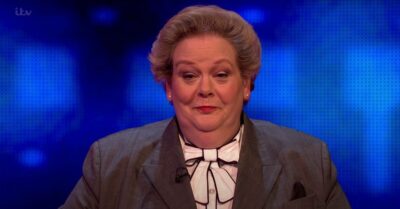 Anne also revealed details about how The Chase is produced (Credit: The Chase YouTube)

She explained: “We rehearsed for the second series.

“It was a year since the first short pilot series had filmed, and in the meantime we had acquired a third Chaser and taken a rung off the board.

“We needed to run it over and over again so that everyone was familiar with the beats.”

Anne also revealed she encourages the jokes about her.

“Our writer has commented on how I actually encourage him to make the insults WORSE,” she told her followers.

Read more: Bradley Walsh on ‘wonderful’ relationship with son Barney and how he ‘takes after his mum’

Anne, who has starred on The Chase since 2010, recently revealed she has a new gig in an upcoming sitcom.

Thankfully, however, she hasn’t signalled any intention to give full-time acting a go in place of the role she is adored for.

The Chase airs on weekdays from 5pm on ITV.