The actor has played machinist Sean since 2003.

Sean had been repeatedly warned about Frank’s bullying nature but had refused to heed the warnings.

But when Frank turned on Sean’s son Dylan – and Sean caught him in the act – it was game over for him and Sean went back to the single life.

However that’s all set to change with Corrie bosses signing up a former The Bill star as his new love interest.

Antony has revealed that Robert Shaw Cameron, 46, has joined the cast.

The actor took to Twitter to share a snap of the pair together at Coronation Street’s recent summer party.

Alongside the picture, Antony wrote: “This one may be a keeper… @itvcorrie @ITV #RobShawCameron #Shaw #Laurence.”

Fans are overjoyed that Sean might get some happiness after a tough few years.

One replied: “Oh please god, you deserve this Sean !! Xx.”

A second said: “Absolutely! You make a gorgeous couple.” 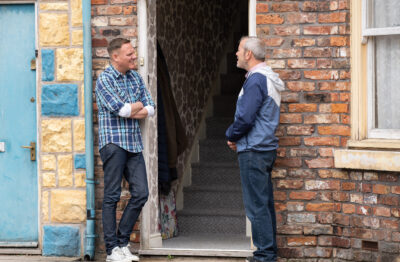 Another added: “Yes! At last!”

Robert has previously appeared in Corrie – playing a police officer in a 2011 episode.

He has also had roles in Holby City and Heartbeat.

Antony revealed last year he had signed a new contract for the soap.

“I have just signed a new contract,” Antony told the Daily Star Sunday.

“I’ve always said that if they’re happy for me to be there, then I’m happy to be there. If it ain’t broke, don’t fix it.

“I feel that even more nowadays because some work is thin on the ground. I am very lucky to be in a job.”