The trainee mechanic has been revealed to be hiding a secret torment, appearing on the cobbles full of bruises and terror. 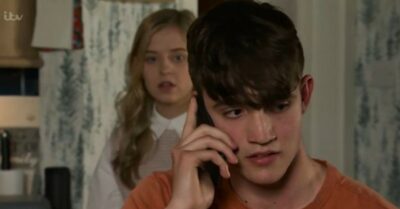 Coronation Street fans are convinced Aaron is being abused – but are they right about who is doing it? (Credit: ITV)

He claimed to girlfriend Summer Spellman that he had been attacked in the street.

However later he got a mystery phone call from someone who Aaron seemed terrified of.

Fans are convinced he is being abused by someone at home – most likely his dad.

But in a shock theory, fans are convinced his dad will prove to be someone very close to home.

They think he will turn out to be the son of Stephen Reid.

And more than that – they think Stephen’s losing his temper at Kevin Webster showed how dangerous he is.

They are sure they spotted Aaron at the police station with Stephen.

One fan said: “At the end of last night’s episode was Aaron sat beside Stephen when he went to give a statement to the police? Only saw the back of his head so it probably wasn’t.”

A second said: “It could have been. That’s why it was noticeable for us to see.

“If it is Aaron he’s probably there because of getting beat up. Which I think he gets from his dad or his mum.”

A fourth said: “I wonder if it was Stephen that beat Aaron…” 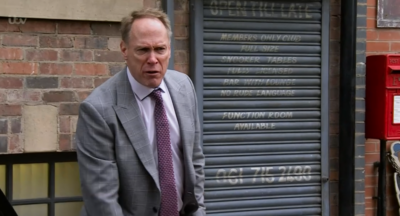 Stephen showed off his temper in Coronation Street last week – but is he connected to Aaron? (Credit: ITV)

Another replied: “Omg that’s actually such a good theory!”

However other fans had another theory about the identity of Aaron’s abuser.

They think Stu Carpenter could be behind it after he was revealed to be hiding a secret about hurting a girl.

He told his long-lost daughter that he “didn’t hurt that girl”. Fans were intrigued.

One fan said: “Okay hear me out… Aaron’s being abused by someone, probably his dad. What if Stu’s his dad? He told Bridget he ‘didn’t hurt that girl’? #Corrie.

“I’m just theorising but feel like it could be someone we know or a past villain.”