Unsuspecting shoppers at Westfield London were stunned to see ex-Olympic gymnast, Nile Wilson, turn the shopping centre into his very own gym.

Nile and his team of gymnasts stunned crowds by showing off their world-class backflips, group tumbles and handstands on concourses and down escalators.

They also performed stunts such as the Human Bowling Ball, an obstacle course, and air track tricks in Westfield London’s Atrium. 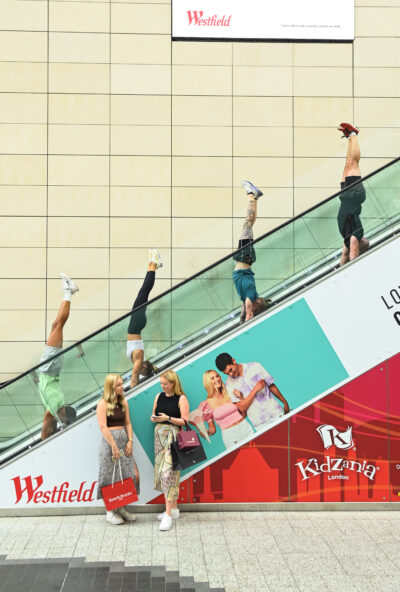 Shoppers at Westfield were in for a surprise (Credit: Cover Images)

The athlete wasn’t just there to show off his skills though.

Of course, Nile won an Olympic bronze medal in the men’s horizontal bar at the 2016 Summer Olympics.

The kids loved it!

And, as part of Try Something New Day, he encouraged shoppers to try their hand at stunts they didn’t know they were capable of.

As well as that, he even assisted members of the public with landing backflips. 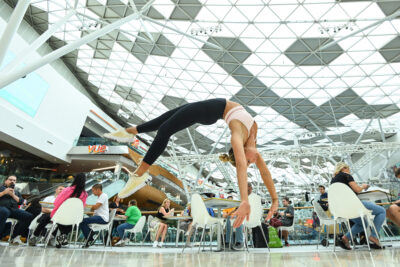 After going head over heels for Nile and his team, one visitor, Alex, said: “I honestly only came in quickly to pick up a couple of bits.

“Then next thing, I find myself having a one-to-one session with Nile Wilson!

“I’m very impressed that he got me to land a backflip, but I definitely won’t be doing it again on my own!”

While another shopper, Julie, was thrilled by the unexpected entertainment.

“It was so much fun seeing Nile and his talented friends have fun and perform their tricks and stunts around the centre. The kids loved it!” she praised.

The impromptu gymnastics classes come as the country marks the 10th anniversary of the beginning of the London Olympics, which got underway on 27 July 2012, and as the 2022 Commonwealth Games kick off in Birmingham.