Today’s show (July 27) was anchored by Christine Lampard and also featured panelist Judi Love, with the latter looking stunned as the row erupted.

Considering how heated things got, it was probably a good thing the show was only 30-minutes long today! 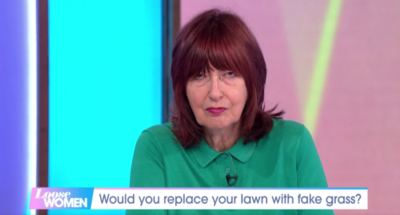 Janet Stree-Porter is not a fan of Linda’s fake grass (Credit: ITV)

Christine Lampard started the show by speaking about the potential hose pipe ban that could come into force.

She said it’s not surprising that one in 10 Brits now have artificial lawn – and stated that Linda Robson is “an absolute convert”.

“I am. We’ve had our lawn, our plastic grass, for nine or 10 years now. And it’s still as perfect as the day we bought it because we bought quite a good one,” she explained, as Janet looked on stoney-faced.

“You go to a carpet shop and we got quite a good one or they don’t last, they burn in the sun or whatever.

“But this is perfect because if Dolly [their dog] has an accident out there… I vacuum it as well, and get every little bit of dirt up.

“I go out with my Zoflora and I wash it all, it’s perfect,” she said.

Linda added: “The kids as well, it’s spongey underneath. So on the slide if they have accidents they don’t hurt themselves.

“I love it, I keep it nice and clean and perfect all the time.” 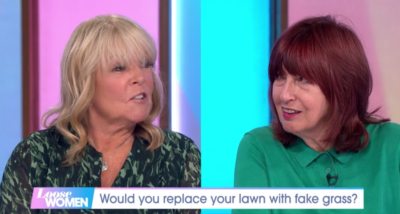 Linda Robson sniped at Janet after taking offence over her comments about her garden (Credit: ITV)

As Linda paused for breath, Janet cut in and declared: “It sounds like a giant green nappy.”

Linda was having none of it, though, clearly taking offence at the comment about her pride and joy.

Read more: Janet Street-Porter’s four husbands – and why she divorced them all

“Well if it’s a giant green nappy then you should be wearing one,” Linda retorted.

Fellow panellist Judi Love looked shocked at the dig and put her hands to her face in shock.

“I’ve got real grass and I let it grow to two feet tall,” Janet declared, putting over her side of the argument. 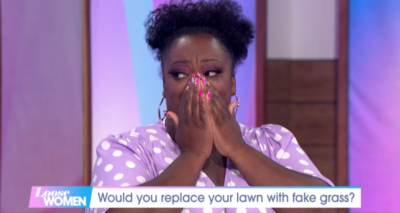 Viewers at home also picked up on the tension.

“Linda just snarled at Janet over the grass,” said one, adding laughing emojis.

Others, though, were Team Janet, urging ITV to stop promoting the use of plastics.

What did you think of the row? Tell us on our Facebook page @EntertainmentDailyFix.