Prince George celebrated his ninth birthday last week and it’s been claimed his doting mum Kate Middleton pulled out all the stops to make it “really special”.

One royal expert has lifted the lid on the royal’s birthday celebrations, admitting that while they were likely “low-key”, George would’ve had “lots of lovely presents to open”.

Katie Nicholl also claimed that George celebrated with “friends and family” in Norfolk, at the Duke and Duchess of Cambridge’s county bolthole Anmer Hall.

Public celebrations for the youngster saw Prince William and Kate release a new picture of George.

The photo showed George flashing his smile at the camera in a blue polo shirt.

Many royal fans thought he looked just like his dad, the Duke of Cambridge.

One person said on Twitter: “He is William’s twin.”

A third added: “Looking more like his daddy every year.”

Behind closed doors though, it’s claimed George had a “really special” day.

Speaking to OK!, royal expert Katie Nicholl claimed that Kate pulled out all the stops for her eldest.

She alleged: “George’s birthday falls in the school holidays so I would imagine it will have been celebrated at Anmer Hall.” 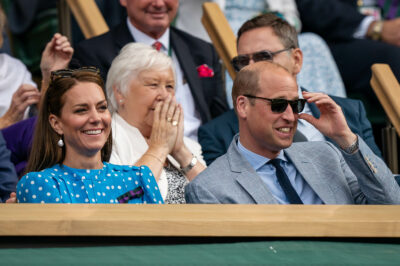 “In keeping with past birthdays, it’s usually spent with friends and family and is a pretty low-key affair. Kate bakes a cake and they have people round to the house,” she added.

The children aren’t spoilt with presents, they never go over the top.

Katie also said the focus is on “just being at home with those nearest and dearest”.

She added that while George, Charlotte and Louis “aren’t spoilt”, George would’ve had a birthday “wish list”.

“The children aren’t spoilt with presents, they never go over the top, but George will have had a wish list and would have had lots of lovely presents to open up on his birthday,” she claimed.