BBC Breakfast presenter Naga Munchetty was forced to apologise after laughing at a cancer joke.

Naga was joined on BBC Breakfast earlier this week by cancer survivor Laura Nuttall, who appeared alongside her mum Nicola and her sister Gracie.

The family were on to discuss Laura’s incredible journey and her recent achievement of graduating from university with a 2:1.

However, Naga was left red-faced after she audibly laughed at Laura’s remark about her illness.

“It was horrible,” explained Gracie. “It was literally the worst moment ever, but to watch her go up on those stairs and get to graduate makes everything worth it.”

“Are you two much closer now?” asked Naga. 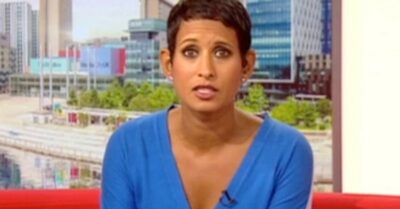 Gracie said: “Yeah,” before Naga continued: “Were you properly like butting heads before?”

“We were really competitive and it just sort of all changed,” added Gracie as Laura chimed in: “The dynamic changed.”

I’m so sorry, I can’t believe I am roaring, but that was very funny.

Their mum Nicole then added: “Gracie always wanted what Laura had until she got brain cancer, and then she thought, no, you’re alright.”

The remark caused Naga to burst out laughing as she became unable to contain her amusement.

She quickly turned to the family and apologised, saying: “I’m so sorry, I can’t believe I am roaring, but that was very funny.” 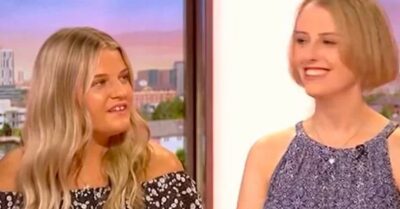 The BBC Breakfast presenter apologised for her giggling (Credit: BBC)

Not taking offence, Nicole explained that laughter has helped the family cope over the last few years.

“We’ve done a lot of laughing in the last three years, we really have because you’ve just got to see the funny side of things.

“You’ve got to find the humour in every situation and look for the positives and find the good bits.