Joe Duttine on ‘last thing he wants’ with co-star wife Sally Carman: ‘It would be a disaster’

Joe Duttine on ‘last thing he wants’ with co-star wife Sally Carman: ‘It would be a disaster’

But Joe has ruled out one thing happening between the couple in the future. 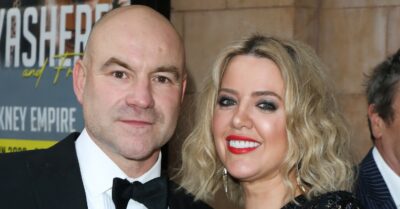 His character Tim Metcalfe may have shared a home with Sally’s character Abi Webster.

It’s nice to have a life away from the Street.

But that’s as close as Joe thinks the newly-married pair should get.

Because Joe thinks it would be weird living out  their real-life romance on-screen.

He told Inside Soap magazine: “That’s the last thing me and Sally want!”

“It would be a disaster. We would make each other laugh all the time, we wouldn’t be able to concentrate – and it’d be a little too close to home, wouldn’t it? We don’t want that as it’s nice to have a life away from the Street.”

Secondly he added: “We met at Corrie and that’s always going to be special for us, but we don’t want to act it out on screen!”

Joe, 52, and Sally, 41, finally tied the knot last week after years of waiting.

Their marriage was postponed due to the pandemic.

They are believed to have been together for around four years.

Rumours of a romance first swirled in 2018 because they were pictured holding hands at the soap’s summer party.

They consequently moved in together but their marriage plans were halted by coronavirus.

Sally and Joe have been sharing pictures of their lavish wedding and their sunshine honeymoon in northern Italy this week.

During their sunny honeymoon they spent time in Verona and enjoyed dinner and the opera.

Coronation Street crew decorated her dressing room mirror with the words “Just  married” when she returned to the ITV set.

Joe is appearing on Tipping Point at 4pm today (July 23) on ITV.

What do you think of Sally and Joe’s marriage? Let us know over on our Facebook page @EntertainmentDailyFix