Michelle Hardwick, who plays Vanessa Woodfield in Emmerdale has revealed she is expecting her second baby.

The actress is married to show producer Kate Brooks and the couple already share son Teddy, who is nearly two.

And she revealed she is already 20 weeks along!

Michelle captioned the snap: “We are super excited about our gorgeous news!

“I’m 20 weeks today and can almost rest a cup of tea on my bump,” followed by a baby emoji and the hashtag ‘big brother’.

Co-stars and friends rushed to congratulate them.

“Waaaaaa! Best news ever, so much love to you guys x,” said Anna Nightingale who played Andrea Tate.

“FINALLY!!! I can tell my Dad and Brother now,” shared Lisa Riley (Mandy Dingle). “Love to you both, You know how elated we are for you!! So much love.”

Fans also chimed in with their well-wishes. 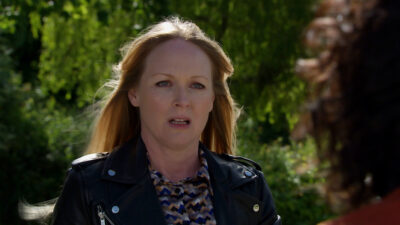 Michelle plays Vanessa on Emmerdale and she has found herself single again following her split from Suzy.

It turned out Suzy had been doing cocaine and supplied Holly Barton with the money to buy the drugs that killed her.

Vanessa found out the truth and although she could have got over the drugs, she couldn’t deal with the lies and ended things.

It’s clear she’s heartbroken though and next week Paddy will urge Moira, Holly’s mum, to give Vanessa her blessing to reunite with Suzy.

But will it work out? Can they really go back.

With Michelle Hardwick expecting another baby so heading off on maternity leave soon, we can guess there’s probably no happy-ever-after on the horizon…