The presenter was slammed for interrupting a guest on today’s show, with viewers criticising her “bad manners”. 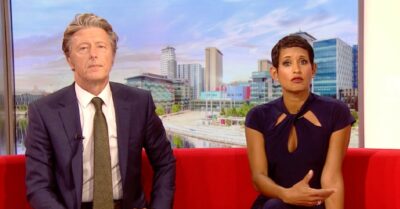 During the show, they welcomed on Ben Levy of Greater Manchester Fire and Rescue Service.

The firefighter was on the show to discuss the recent wildfires that have hit the UK due to the heatwave.

Ben explained that many of his colleagues are still tackling the fires, which have caused much damage up and down the country.

He also said that the heatwave this week has been a “wake-up call” in terms of climate change. 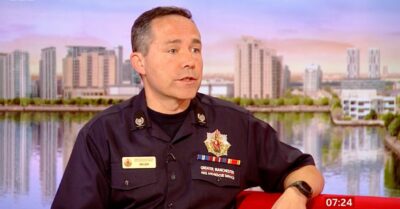 Ben Levy was on the show (Credit: BBC)

The conversation then moved on to open fires in the country.

As Ben explained that packages for barbecues, for example, will have instructions on how to use them safely, Naga interrupted.

“But shouldn’t that go further, though? In the sense that the signs should be on parks?” she asked.

“There should be rules, there are no rules against them so – we were asking about stupid things and saying people do stupid things, but actually they’re not doing anything wrong?” she continued.

“So it has to go bigger – no fires, no campfires, no barbecues on open land. Is that the next step?” she asked.

Before Ben could even properly answer her, Naga interrupted again. “Would you push for that?” she asked. 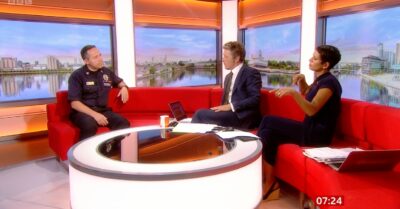 As expected, viewers of the show were not happy with Naga interrupting the guest. Some took to Twitter to complain.

You can guarantee she’ll do it every time. Such bad manners.

“#BBCBreakfast please ask Naga to stop talking over / interrupting the very nice man from the fire service. He’s the expert!” one viewer tweeted.

“You can guarantee she’ll do it every time. Such bad manners,” another replied.

“@BBCBreakfast disgusting how Naga is interviewing the chief firefighter of GM like she is talking to an politician. Shocking how she was interrupting him,” a third wrote.

“@BBCBreakfast can you tell @TVNaga01 to stop talking over the fireman who was on about the recent fires. Not only did he look annoyed I’m sure most others who wanted to listen to him were too,” another said