Cliff Richard made a musical appearance at Wimbledon today… even though it wasn’t raining.

Pop legend Cliff, 81, gave those in attendance in SW19 a rendition of Summer Holiday to mark Centre Court’s centenary.

However, while Cliff’s routine may be a fixture in Wimbledon lore, not everyone was pleased to see him.

Additionally, moments after the performance, Sue shut John down after he made references to her and Cliff’s romantic history. 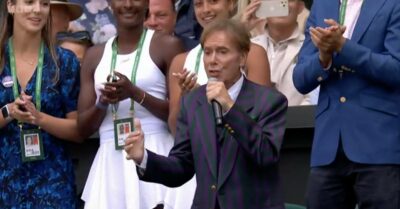 Why was Cliff Richard singing at Wimbledon?

Cliff getting up to entertain the crowds when rain stops play is a Wimbledon tradition akin to strawberries and cream.

However, on this occasion, the lifelong bachelor was not called on due to the weather.

Instead, his brief turn was a treat for the fans and was heralded by thunder booming through loudspeakers.

And even though it lasted mere moments, social media users were quick to offer their opinions on the Cliff sideshow. 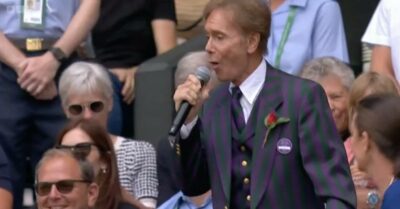 One person watching at home tweeted the verdict: “Cliff Richard singing though was cringe.”

Another agreed: “That Cliff Richard singalong was a bit cringe. #Wimbledon.”

While a third added: “Did anyone really want to see that utter cringefest from Cliff Richard? #Wimbledon #CentreCourt100.”

There should have been a trigger warning for that Cliff Richard performance.

Elsewhere, someone wrote: “There should have been a trigger warning for that Cliff Richard performance. Worst thing I’ve ever experienced #Wimbledon2022.”

And another person joked they felt the sing-song might have been a fever dream.

“Did I just imagine Cliff Richard singing to the Wimbledon crowd?” they tweeted, adding laughing emojis to their post. 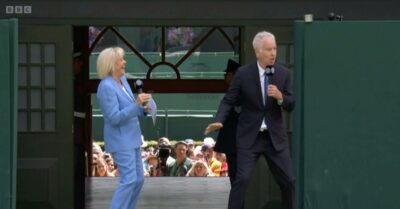 But not everyone was anti-Cliff. Some compared complaints from others about Cliff’s voice to criticism levelled at Paul McCartney for his Glastonbury set.

“Thought it was INCREDIBLE. So nice to see old faces. Cliff Richard was great! What a voice for someone 82 in October?!” one fan tweeted.

Someone else insisted: “Everyone complaining about Cliff Richard – it is a nod to the past when he spontaneously entertained the crowd in the 90s due to rain halting play. It’s nostalgic. Loosen up. It’s light-hearted fun.”

And another user moaned: “So many rude comments about Sir Cliff Richard @Wimbledon. He is nearly 82, looks great for his age, still plays tennis and he can still sing.”

Calling for a round of applause for Cliff, he then turned to Sue and asked if they’d previously had a “thing”.

Sue, who despite reports suggesting she may have laryngitis was able to host, laughed off John’s remarks.

Urging him to “stop” and insisting they “move on”, one Twitter user joked of the seemingly-staged ‘awkward’ moment: “Wimbledon just peaked.”

Shortly afterwards, John seemed to go ‘off script’ once again as he thanked Sue, who is stepping down from Wimbledon coverage, after nearly thirty years of fronting tennis for the BBC.

He encouraged attendees to congratulate Sue – and she appeared to wipe away tears as she received a standing ovation.

“Lovely touch by John McEnroe. Sue Barker is a huge part of Wimbledon and tennis and will be hugely missed,” one fan on Twitter reflected.