William and Kate fans have all made the same observation after their first official portrait was unveiled earlier today (June 23).

The Duke and Duchess of Cambridge have been immortalised on canvas for the very first time by artist Jamie Coreth.

It’s currently hanging in the Fitzwilliam Museum in Cambridge, which the couple visited earlier today.

And, after catching their first glimpse of the portrait, eagle-eyed royal fans all spotted the same thing about the future king. 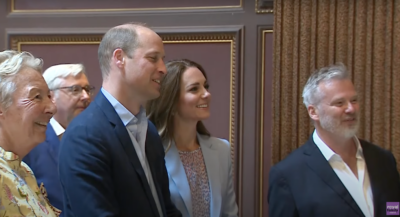 The royals got to catch a glimpse of their portrait today (Credit: YouTube)

The portrait was unveiled earlier on today, with William and Kate heading to Cambridge to see it in person.

The painting features Kate wearing a metallic green dress and William in a suit.

They are both seen looking off into the distance in the portrait.

However, while many thousands of fans agreed it was beautiful and looked more like a photograph than a painting, others picked up on William’s pose in the portrait.

Not only that, they likened the future monarch to either James Bond or a male model!

Duke and Duchess of Cambridge deliver their verdict

William and Kate posted a picture of the painting on their official Instagram page.

The image shows four youngsters looking at the painting.

They said: “Delighted to see this new portrait unveiled at the @fitzmuseum_uk in Cambridge today!”

A news crew followed the Cambridges as they took a look at the painting, with William admitting: “It’s quite big!”

‘The pose is very James Bond’

The comments came thick and fast, with one person admitting: “I’ve never seen William stand like that! But I think I love it!”

“The pose is very James Bond,” said another. “I like it.”

I’ve never seen William stand like that but I think I love it!

“I thought the same thing,” said a third.

Another said that William looked like a male model.

“William is standing like a GQ model,” they said of the prince, who is painted looking shaken, not stirred, with his hand in his pocket.

“Love the Prince’s stance,” said another. “It adds the necessary realness to the portrait – a bit King George IV.”

So what’s your verdict on the portrait? Tell us on our Facebook page @EntertainmentDailyFix.