Gloria Hunniford returned to Loose Women today following a horrific fall which she admits has left her “petrified”.

The telly favourite, 82, told viewers and fellow panelists she took a heavy tumble directly on her face.

And even though Gloria suffered broken bones in her face and painful bruising to her legs, the star was delighted to be back on the box.

Gloria beamed: “This is my first day out [since it happened], actually – and I couldn’t think of a nicer place to come.” 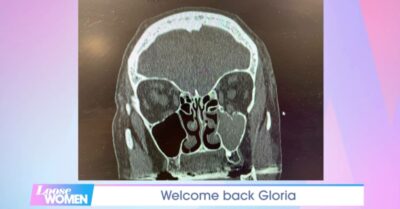 The X ray shows how the bone on the right of Gloria Hunniford’s face was shattered (Credit: ITV Hub)

Wednesday’s (June 22) episode began with host Jane Moore explaining Gloria had been off TV screens for a while due to a “nasty fall”.

And as she did so, fellow panelist Judi Love walked over to embrace Gloria and kiss her on the cheek. Later on, Brenda Edwards also offered a supportive hand.

“I had a big one, I’m afraid, this time,” Gloria admitted when asked about her fall onto a “very hard wooden floor”.

She added: “What I did is I tripped over a rug and I took the fall totally on my face.”

Gloria repeatedly thanked the show’s make up artist Linda for covering her face “magically” – later indicating she is still “black and blue” with bruises. 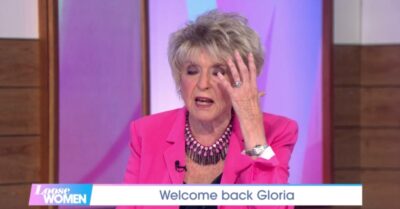 Gloria tripped over a rug onto a hard wooden floor (Credit: ITV Hub)

What injuries did Gloria sustain?

Gloria went on: “I’ve cracked a bone under my eye, unfortunately.

“There’s a bone around your eye that holds the socket in place. And that is actually broken. So as long as it doesn’t take the muscle down, my eyesight at the moment is good.”

An image of the graphic injuries Gloria suffered to her legs was also shown. And Jane, who said she had FaceTimed Gloria when she wasn’t made up for TV, suggested the Northern Irish presenter’s face wasn’t dissimilar.

Hailing the NHS for their “amazing” treatment, Gloria did confess she was concerned about other potential injuries, however.

“I was worried about a clot in the brain because a friend of mine had a similar fall. I was very relieved to know I didn’t have one,” she said. 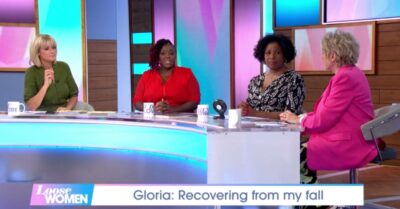 Gloria continued by saying she had also been anxious about enduring a “smashed sternum”. But, following various scans, Gloria was relieved to know the reason for a pain down her chest was due to a muscle injury.

Asked about legs, she conceded: “The leg is pretty horrific-looking, isn’t it? But it is wrapped up.”

Gloria also described how medics had managed to ensure skin that was “coming away” from her legs was reset as part of the healing process.

But Gloria also added how the fall has knocked her self-assurance.

“I’m a reasonably confident person, usually, moving around,” she said.

“I don’t want to sit down doing nothing, which is why I’m here today. But it does affect your confidence.

It does affect your confidence.

“Even in my own garden, with steps I know very well. But I’m petrified of falling again. And I haven’t been able to go out to shops, because I didn’t have anyone to do my make up.

“But I do think I will walk along the streets now looking for uneven pavement stones.” Gloria beamed as she was introduced after being away from the show (Credit: ITV Hub)

Nonetheless Gloria highlighted how important it is for her to be out and about.

“It is good for my head as I’ve been a worker all my life. And I want to get back to normality.”

Best wishes to Gloria for her continued recovery.