Emmerdale spoilers for next week see David take advantage of traumatised Nicola by exploiting her situation.

A collision in the village between the pair sees David fake an injury to claim on his insurance, but will anyone rumble his plot? 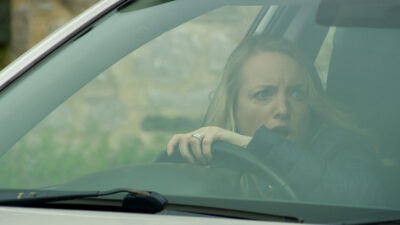 David has been having money troubles for a number of weeks now. But he has chosen not to confide in partner Victoria and instead set up a lavish proposal and spent a fortune on an engagement ring.

She said no to his extravagant gesture, but the pair are now making wedding plans.

And the cost of those is threatening to spiral.

Add to that his failing business and Jacob’s university fees, and David has got himself in quite the financial pickle.

Nicola, meanwhile, is suffering immense trauma following her attack last week. She was assaulted and left for dead by a gang of teenage girls.

It’s becoming clear she is suffering from PTSD as she struggles to leave the house and doesn’t want to be alone. 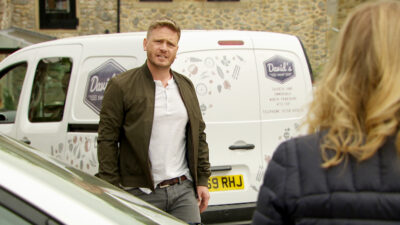 When Nicola is forced to pick up the kids next week, she steels herself to drive her car.

Overwhelmed by thoughts of her attack she panics and slams down on the accelerator instead of the brakes.

She crashes into David’s van.

He angrily gets out and confronts her, failing to see how distressed she is. As he demands insurance details, it’s all too much for Nicola who rushes back inside and locks the door.

David knocks and begs her for the insurance details, but Nicola is frozen solid and can’t let him in. 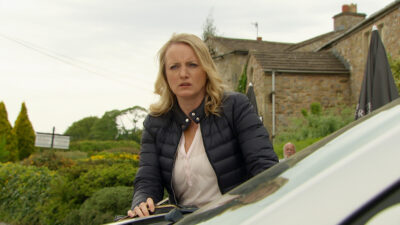 Nicola is beside herself with panic (Credit: ITV)

When David later calls the insurance company, he fakes a neck injury.

Victoria buys his story and looks after him, but busybody Brenda has other thoughts – she’s on to David…

Brenda has a go at him for taking a claim out against Nicola, who is clearly in the midst of a breakdown. Brenda insists the accident was minor and David can’t be that hurt.

Will he tell the truth?

Meanwhile, Priya alerts Victoria to the fact David has missed some payments. Will she finally work out what’s going on? 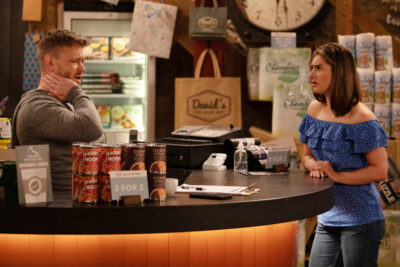 David is making his injury up, but will Victoria realise? (Credit: ITV)

Of course, David and Nicola have a history together – they were lovers who planned to con her late husband out of his money.

But David didn’t feel comfortable with Nicola’s plan to off Donald so she could inherit everything and they could be together.

David told Donald the truth and then broke up with Nicola.

So David does have a conscience then…

Will he find it again before it’s too late?