Coronation Street has aired the return of Wendy Crozier and it’s fair to say Tracy McDonald is not happy about it.

On the surface, Wendy is back to supervise Abi Webster in the care of baby Alfie. 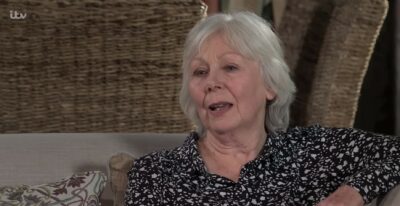 Is Wendy back to help Abi – or for another reason? (Credit: ITV)

Why has Wendy Crozier returned to Coronation Street?

Wendy Papadopoulous – or to give her her correct name: Wendy Flamin’ Crozier – made a comeback on Friday, June 17.

Actress Roberta Kerr has reprised her role after last being seen on screen in 2012.

She was revealed as the foster carer who Abi Webster has moved in with.

Abi is under supervision to prove she is a good enough mother to baby Alfie to have custody full-time. She has moved into Wendy’s house and Wendy is helping her get back on her feet.

But when Abi asked if they could go and visit Kevin on Coronation Street it was clear Wendy was nervous. She hid herself from sight as much as she could, but it wasn’t long before Tracy spotted her.

“Wendy Crozier?” she shrieked. “What brings you back round here? Did your witches’ broom take a wrong turn?”

Wendy later filled Abi in on why Tracy hates her so much, but is there more to the story? 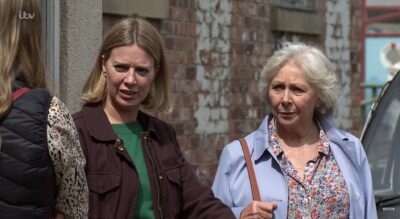 One fan thinks there definitely is.

In response to someone writing on Digital Spy forums questioning whether there is any “significance” in Wendy being appointed Abi’s foster carer, they wrote an explosive theory.

“I think she may have had a secret child.”

Others then speculated on the identity of that child – with one even suggesting it could be Sean Tully!

As far as we know no children came out of Wendy and Ken’s affair, but that’s not to say it couldn’t have happened… 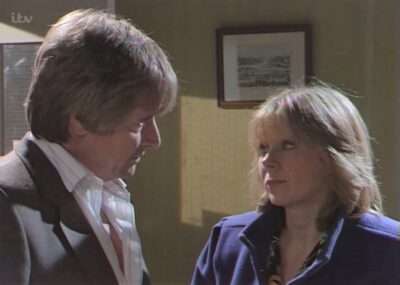 Ken and Wendy had an affair in the 80s (Credit: ITV)

What happened between Ken and Wendy?

Wendy arrived in 1989 working as a Weatherfield Council secretary.

Eventually Ken’s wife Deirdre found out and got Wendy fired so Ken hired her to work at the Recorder!

Ken and Wendy quickly began an affair and Ken moved in with Wendy after Deirdre threw him out.

But he soon realised it was a mistake and sunk into a depression before leaving Wendy.

Wendy went on to marry a man named Christos Papadopoulos in 1991 and they moved to Norfolk.

But after 15 years together, Christos died of lung cancer and Wendy moved back to Manchester.

Ken and Wendy were reunited in 2012, but things ended badly when she lied to Deirdre that they’d slept together again. Ken told Wendy he never wanted to see her again.

We haven’t seen her since, but has Wendy been hiding Ken’s love child all these years?