During a health segment before 7am with Dr Amir Khan, Adil Ray revealed he has developed hay fever in adulthood.

He then asked Dr Amir if he could address some myths regarding a cure for symptoms. Specifically, Adil said he’d read sex is good for easing hay fever.

“Give us some good news!” Adil implored.

It then all got a bit excitable in the GMB studio as Adil, Dr Amir, co-host Kate Garraway and guests Iain Dale and Grace Blakeley chuckled over the suggestion.

They also cracked further gags and spoke over one another as the segment fell apart. 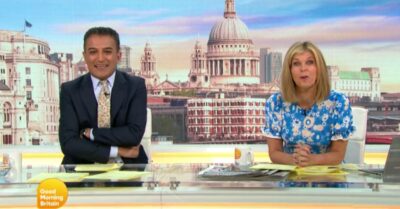 “There will be couples up and down the country going: ‘I’ve got hay fever, love!’” Adil boomed as several people spoke simultaneously.

Kate joined in: “He’s hoping for a prescription!”

And getting into the spirit of it all, Dr Amir also joked: “I think it takes your mind off your hay fever…”

He continued that sex might only help out “for a short or a long period” before his voice trailed off, suggesting it was dependent on sexual stamina.

Amid uproarious laughter, Kate placed her hands on her head in faux panic at the discussion getting out of hand. 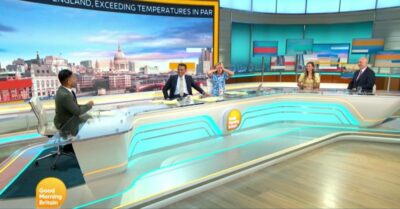 It was all too much for Kate Garraway as she puts her hands on her head (Credit: ITV)

‘I think we’ll leave it there’

Moments later, as Dr Amir discussed using Vaseline around the nostrils to counter hay fever, someone else commented: “Sexy.”

And it was also suggested the next step was to “go to the bedroom”.

At that point both Adil and Kate wound the silliness up.

The people on Love Island are looking for a cure for hay fever.

“I think we’ll leave it there,” Adil said and Kate agreed.

However, she did squeeze one more wisecrack in, adding: “The people on Love Island are looking for a cure for hay fever.” 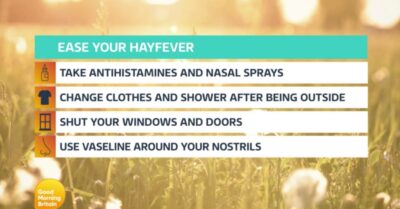 Viewers commenting on social media did not seem impressed by the giddy behaviour on display.

“Gosh, utter chaos on #GMB as fully grown adults giggle like children because someone mentioned having sex,” one Twitter user wrote.

Another posted: “Someone mentioned the word ‘sex’ and they all jump up shrieking with laughter #GMB.”

“Omg. Calm down. It’s not that exciting #GMB,” moaned a third.

Good Morning Britain airs weekdays on ITV from 6am.