Coronation Street viewers have begged bosses to bring Cathy and Brian’s ‘boring’ storyline to an end.

This week Cathy cheated on boyfriend Brian and in last night’s episode (Wednesday, June 15) Brian found out the truth.

However some fans don’t appear to be enjoying the storyline. 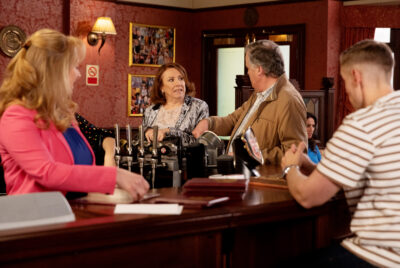 Brian and Cathy have been together for quite some time (Credit: ITV)

Cathy and Brian first got together in 2017 and they currently own The Kabin on Coronation Street.

Recently Brian has been trying to convince Cathy to move down to Cornwall.

This week, Brian proposed to Cathy, but it wasn’t exactly the romantic surprise she hoped for.

Cathy went over to The Rovers pub and told Jenny, Evelyn and Daisy about Brian’s poor proposal.

Soon Jim Fizz came into the pub as he was taking the cocktail class.

It wasn’t long before Cathy told Jim all about her relationship troubles and they started flirting and ended up kissing in the beer garden.

They were caught by Evelyn, who quickly diverted Brian to make sure he didn’t catch Cathy.

However in last night’s episode, Brian did find out the truth.

After Cathy told him she accepted his proposal, he was thrilled. However he hired Jim Fizz for a lesson in cocktail making. 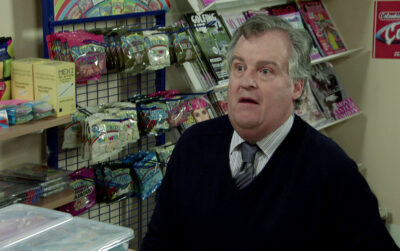 When Jim began telling Brian about the woman he kissed in the Rovers, Brian quickly realised he was talking about Cathy.

As Cathy was announcing their engagement to friends outside The Kabin, Brian came out and said they were no longer getting married.

In private, Brian confronted Cathy over her encounter with Jim. But she was quick to tell him she knew he had been writing letters to his ex-girlfriend.

Brian admitted he rejected his ex-girlfriend and Cathy should’ve spoke to him instead of kissing someone else.

However fans are already fed up of the storyline and have begged bosses to bring it to an end.

Omg who cares about Cathy and Brian? #corrie

We all know Cathy's leaving so who cares? #corrie

Did you watch last night’s Corrie? Leave us a comment on our Facebook page @EntertainmentDailyFix and let us know what you think of this story.