Nick introduced viewers to the Chapman family, with many admitting they were in tears soon after the episode started. 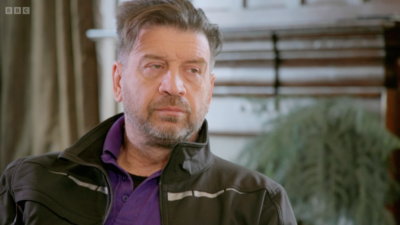 The heartbreaking story appeared to have Nick Knowles fighting back tears on DIY SOS (Credit: BBXC

Dad Peter was building an extension for his family at their home when he received his own devastating diagnosis.

Up until then he had been caring for his wife Sarah and daughter Suzanne, who both have myotonic dystrophy.

Tragically, just two weeks before the DIY SOS team arrived, the couple’s daughter Margaret passed away after suffering from the same condition.

Chatting to Sarah, Nick said the team had offered to put the Big Build off so the family could come to terms with their grief.

But faced with the prospect of having to move out of their home if it wasn’t completed, the family had no choice but to continue with the work. 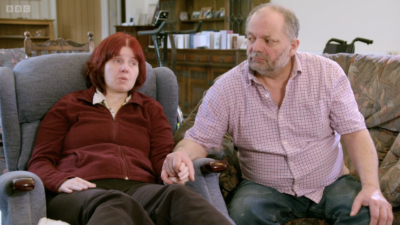 What is myotonic dystrophy?

Myotonic dystrophy is a long-term genetic condition that leads to muscle loss and weakness.

Suzanne, 35, has a mental age of 12 and Sarah – who is in the early stages of the disease – can only walk short distances.

Tonight’s episode of DIY SOS has got me in tears. Truly heartbreaking.

“As time went on, we realised it was going to get worse – and it did,” Peter explained to Nick during the emotional episode.

The DIY SOS team got to work on putting right things that Peter had started, before renovating the house and showing off the results to the family.

Peter declared that it was an “unbelievable” transformation.

He also said that the work the team had done will “make a huge difference” to their lives. 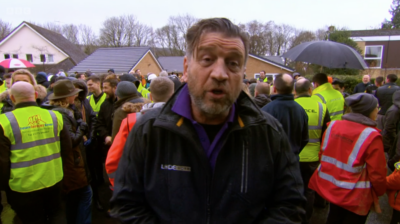 Nick and the team endured some pretty dire weather as they got their Big Build done (Credit: BBC)

With host Nick fighting back tears, viewers admitted they too were reaching for the Kleenex.

“So sad to hear the story about the Chapman family,” said one.

“Tonight’s episode of DIY SOS has got me in tears. Truly heartbreaking,” said a second.

Read more: Five arrests made over suspected murder of man who appeared on DIY SOS

“Omg the tears,” said another. “What a privilege you have to help people who so need it.”

“Amazing work all. Couldn’t help but cry through the episode. Truly touched. Well done all,” said another.

“Had me crying all the way through. What a lovely family,” said another.

“Will be bulk buying some tissues for the next series! Amazing what you all do, lost for words,” another concluded.

Head to our Facebook page @EntertainmentDailyFix and tell us what you thought of the episode.