The cast of Sherwood includes some of the biggest names in British TV, and fans have noticed former DCI Banks star Andrea Lowe amongst them.

So who does she play in Sherwood, what else has Andrea Lowe been in, and will she ever return in DCI Banks? 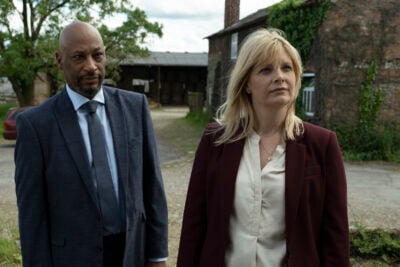 Who plays DI Taylor in Sherwood?

Actress Andrea Lowe portrays DI Taylor in Sherwood in the cast of the excellent BBC One thriller.

DI Taylor is one of the Nottinghamshire police force.

The team must investigate the murder of Gary Jackson, before the killer strikes again.

Viewers will know Gary (Alun Armstrong) went against the rest of his village in the 1984 miners’ strike.

He continued to strike, when many of the others returned to work – a betrayal that remained red raw up until his death.

In episode one of Sherwood, Gary was shot dead with a bow and arrow.

Who is Andrea Lowe?

Andrea Lowe is an actress who’s been on our screens ever since 1993, when she appeared as Kim in the TV movie The Token King.

Andrea, now 47, has gone on to star in dozens of high profile TV shows, not least DCI Banks.

The actress, like her Sherwood character, is from Nottinghamshire.

Andrea has one son with her long-term boyfriend Terry Betts, a fashion buyer. 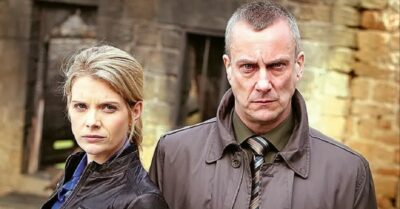 Who did Andrea Lowe play in DCI Banks?

Andrea first appeared as the character in the pilot DCI Banks: Aftermath in 2010.

She went on to appear in all five series of the popular crime drama.

The series was based on Peter Robinson’s Inspector Alan Banks novels.

In a lovely case of serendipity, Andrea Lowe and Stephen Tompkinson are both reunited in the cast of Sherwood.

Stephen will appear as Warnock in episode three (Monday June 20 2022) at 9pm on BBC One.

What happened to DS Annie Cabbot in DCI Banks?

She was stabbed in the street – leaving DCI Banks absolutely devastated.

Of course, viewers know that the pair had finally embarked on a relationship after she had decided to leave her husband.

The final two episodes of DCI Banks’ season 5 focused on the investigation into Annie’s murder.

DCI Banks was convinced Richards was behind her death.

However, an increasingly erratic and obsessed Banks was taken off the case by his superior after assaulting Richards.

In DCI Banks season 5, episode 6, DCI Banks continued his investigation into Annie’s murder despite being suspended.

In fact, it was one of Steve Richards’ henchman who killed Annie.

Andrea Lowe was also absent for some of the second series while her character was on maternity leave.

In real life, actress Andrea had also had her first child. 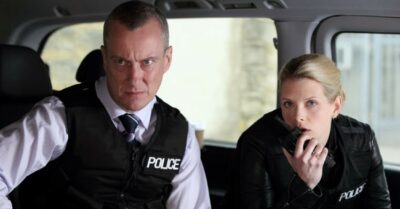 DCI Banks stars Stephen Tompkinson and Andrea Lowe will be reunited in Sherwood on BBC One (Credit: ITV1)

Will DCI Banks ever return with Andrea Lowe?

On December 03 2015, ITV announced the show was renewed for a fifth and final series.

At the time, ITV said: “After five series, ITV has taken the decision not to recommission DCI Banks.

“We’re grateful to the production team at Left Bank Pictures for creating the world of DCI Banks and the actors Stephen Tompkinson, Andrea Lowe and Caroline Catz for the commitment and dedication they’ve shown to their roles.”

Fans of the police show were pretty annoyed to say the least!

There were lots more DCI Banks books left to adapt, so the series could well return one day in the future if ITV changes its mind!

Of course, Andrea’s character Annie could not return unless in ghost form.

What else has DCI Banks star Andrea Lowe been in?

In 1993, Andrea had her first film role, alongside Samantha Morton, in the Nottingham-based high school musical comedy drama called The Token King.

Andrea was just 18 when she bagged the role.

Andrea went on to star in Rescue Me as Melanie Woods in 2002, and played Zoe Phelps in Where the Heart Is in 2006.

She popped up in numerous TV shows after that, including The Bill, New Tricks, Marple, and The Tudors.

However, it was her role as DS Annie Cabbot in DCI Banks that most TV viewers will remember her for.

Since ITV axed the show, Andrea has played Ally Sutton in Trust Me in 2017, Eve Pembery in Agatha Raisin in 2018, and Pauline Lunn in Endeavour in 2021.

She appears in all six episodes of Sherwood on BBC One.

Sherwood airs on Mondays and Tuesdays on BBC One at 9pm. Series 1 to 5 of DCI Banks is currently available to watch on BritBox.

Did you recognise DCI Banks star Andrea Lowe in the cast of Sherwood? Leave us a comment on our Facebook page @EntertainmentDailyFix.