The Duchess of Cambridge, 40, looked impeccable as she arrived at Windsor Castle for the royal event.

At one point the mum-of three was pictured standing next to Sophie, Countess of Wessex.

Sophie, in pink, wore a delightful fashion counterpoint to Kate as the pair both embraced a sleek and classic style.

The Countess of Wessex and Kate Middleton were both dressed to impress (Credit: Shutterstock)

According to reports, Kate was togged out in a Catherine Walker coat dress.

She paired this with a blue fascinator of a similar shade, a blue clutch and blue heels.

Some reports suggest Kate’s fascinator costs £560 and is from Juliette Botterill.

Kate also reportedly wore an £8,400 G. Collins & Sons tanzanite pendant necklace jewellery for the ceremony, as well as earrings worth £6,100. 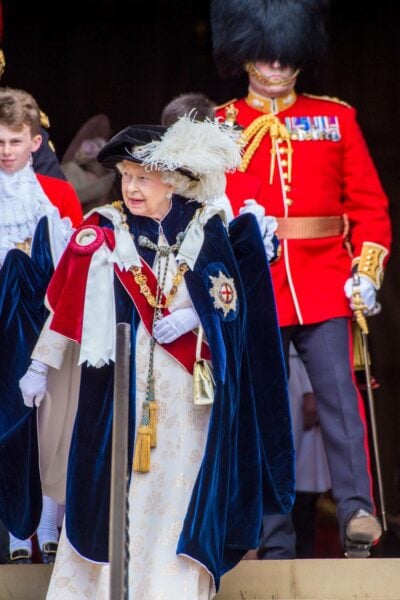 The Queen pictured in her Garter Day finery in 2019 (Credit: SplashNews.com)

What happened during Garter Day?

Kate and Sophie were joined by other members of the royal family for the ceremony – but not, it appears, by Prince Andrew.

The Duke was tipped to attend but it is believed Prince Charles and Prince William objected to the plan.

A statement read: “The Duke of York will attend the investiture and lunch today but will not be part of the procession or service.”

The Duke of York will attend the investiture and lunch today but will not be part of the procession or service.

William and his father were however spotted in his full ceremonial regalia for the Order of the Garter proceedings.

Camilla was installed as a Royal Lady of the Order of the Garter during the service at St George’s Chapel.