Letitia Dean revealed her dad Leslie has died during an emotional speech at the British Soap Awards last night (June 11).

The EastEnders star admitted she found the moment “overwhelming” as she picked up an award for Outstanding Achievement.

Letitia, 54, was presented with her gong by Walford legend Anita Dobson, who played her character’s mum Angie.

Sharon Watts actress Letitia told fans she was “touched” to receive the prize, wiping at her eye with a finger. 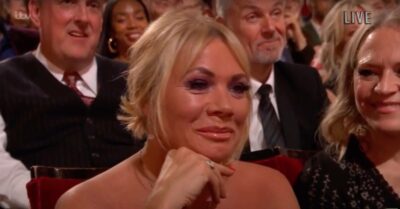 Anita, 73, hailed Letitia as “quirky, funny, talented, glamorous, and iconic” before Letitia made her way onto the stage to accept her award.

The telly fave, who first appeared as Sharon in EastEnders in 1985, joked she “isn’t good at public speaking” as she offered a few stirring words.

But she made sure to dedicate her thoughts to her late father, who she announced had recently passed away. 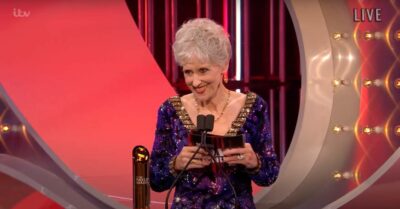 ‘I hope my daddy is proud’

Letitia went on to tell her fellow soap actors and actresses, as well as fans, that her parents are at the forefront of her mind.

“I lost my daddy a week ago so this is for him. I hope he is proud,” she said.

This is for my daddy and my darling mummy.

Letitia continued: “This is for my daddy and my darling mummy.

“I hope you’re enjoying your fish and chips.” 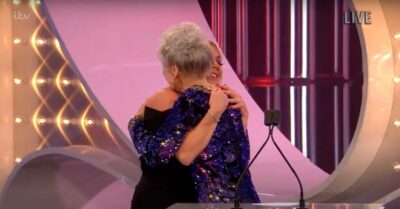 Thanks to EastEnders fans

Letitia also made sure not to forget expressing her gratitude to viewers who have watched Sharon’s hijinks for nearly 40 years. 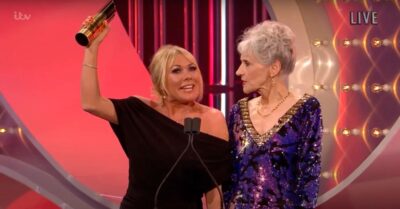 As co-stars such as Kellie Bright, Danny Dyer and Brian Conley cheered her on, Letitia added: “But seriously, thank you guys.

“I’m not very good at this public speaking, but I do love you all and thank you so much for the way you love me.”