UK weather forecasts indicate very warm and sunny conditions may be on the way, according to reports.

News outlets claim a heatwave will arrive next week, with a plume of hot air from Spain bringing in 32C temperatures.

Additionally, it is suggested the fine weather will stick around. The reports reckon the heatwave will hit the UK on Wednesday and could remain for five days. 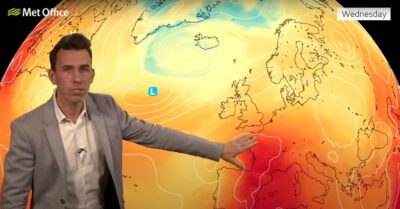 Hot air is on the way from Spain next week (Credit: Met Office – Weather YouTube)

Weather expert Phil Morrish reportedly told the Express website that “very, very hot air” is being driven to the UK from deserts.

He said: “We’ve got higher pressure developing over southern Spain and this is going to give us some very warm air coming up from the UK as from about Wednesday next week.

“It’s some very, very hot air coming from the North African desert moving northwards into the UK. This is what we call a Spanish Plume.

“It looks like the Spanish Plume will arrive on Wednesday, with temperatures rising into the mid-twenties. They could peak on Saturday when we could reach 30C or 31C in the south, 32C in London and 28C n the Midlands.”

Additionally, Mr Morrish suggested that 24C is likely for areas in the north of England.

He added such temperatures should continue until next weekend at least. 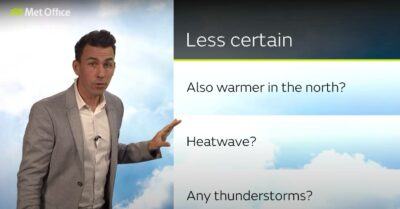 Could it get even hotter?

Furthermore, according to latest reports, it might get even hotter this summer.

The Express website also quotes the Netweather forecast to suggest “record-breaking” temperatures of 35C or 36C could soon arrive.

However, such balmy weather is expected to be confined to the south east of England in places like Sussex, London, Surrey and Kent.

Furthermore, Met Office forecaster Simon Partridge said: “We are most likely looking at high pressure for next week. That means the weather will be nice, settled and dry with some decent sunshine across the southern half of the UK.”