The DIY SOS star appeared on today’s show as a guest as he spoke about the BBC series and what he’s been up to lately.

But within minutes of the show starting, many viewers were distracted by the floral shirt Nick was wearing. 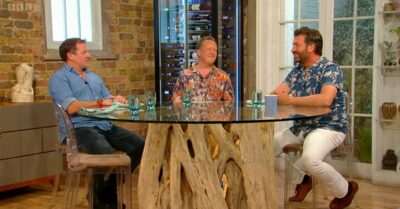 One viewer tweeted: “@MrNickKnowles that shirt is,” alongside a GIF which read “frickin’ awesome”.

Read more: Nick Knowles gave one of his children a whopping 13 middle names

Another joked: “Crikey must be the first time @jollyolly has been outclassed in garish shirt stakes by @MrNickKnowles!”

Others joked that host Matt Tebbutt didn’t ‘get the memo’ as he wore a plain blue shirt.

One asked: “Did chef not get the ‘flowery shirt’ memo?”

Another commented: “I bet Matt feels left out, obviously didn’t receive his memo about the ‘shirts’!!” 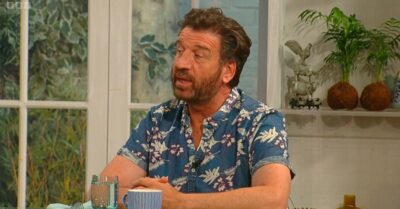 Nick has previously opened up about his appearance after gaining weight in lockdown.

He spoke about the difference in his appearance just before a DIY SOS Children In Need special in 2020.

Speaking to Metro at the time, Nick explained: “We start the show with me looking hairy, bearded and very fat.

“Because during lockdown… I put on weight during lockdown, because I was doing a lot of writing and not being able to travel much, and had a small injury which meant I couldn’t do the training that lots of other [people] were doing.”

Elsewhere, Nick once tried a vegan diet after going to a retreat in Thailand.

Speaking to the Big Issue in 2016, Nick revealed: “So I went to a retreat in Thailand. I took up yoga, became vegan, and they’ve worked well for me.”