Prince George was caught in a funny Jubilee moment and royal fans are loving it on Twitter.

George, eight, attended a lot of the Platinum Jubilee celebrations with his parents Prince William and Kate Middleton and his younger siblings.

His younger brother Prince Louis, four, stole the show throughout the weekend with his adorable and cheeky antics in front of cameras.

But one moment showing George’s reaction to Louis acting up has won over royal fans.

Prince George’s reaction is the best 😂

A GIF clip has been shared to Twitter showing the Cambridges at the Jubilee pageant on Sunday (June 5).

In the GIF, Louis is seen throwing two peace signs in the air as Kate and William laugh.

His older sister Princess Charlotte also gives a little giggle as does George. 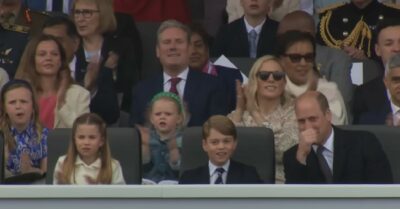 But after a while it seems George is an embarrassed older brother and puts his head in his hands!

One Twitter user shared the moment and wrote: “Nooo this is so cute!

“Prince George’s reaction is the best.” 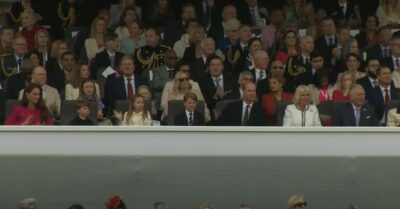 The Cambridges all attended the Pageant on Sunday (Credit: YouTube)

Fellow royal fans loved the moment as one said: “George is like ‘not again Lou’.”

Another gushed: “Oh my goodness, George’s reaction…classic big bro. Too funny, what a fabulous little family.”

A third tweeted: “As the oldest sibling in my family, I thought the best part was watching Prince George’s mortified reaction at the exuberance of Prince Louis.

“Really grounds that whole family… I love it!”

Louis definitely took centre stage during the Jubilee celebrations as royal fans loved seeing him celebrate and throw a bit of a tantrum.

But fans loved seeing all three Cambridge kids out in public together for such an important occasion.

One said on Twitter: “Witnessing the Cambridge children enjoying Platinum Jubilee events has been a blessing.”

Another added: “For me the best part of watching the Platinum Jubilee has been the Cambridge children.”