Last night’s Love Island ended with plenty of drama as Davide finally chose his new partner in the first recoupling of the series.

The Italian bombshell opted to couple up with Gemma Owen, daughter of footballer Michael Owen.

However, fans are fuming at Davide for his decision and some even claimed to have “switched off” the show! 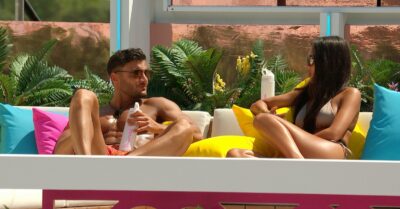 As the show ended last night, Davide revealed that wants to couple up with Gemma.

David joined the villa later than the others, after the public already selected which contestants they wanted to partner up.

Gemma and Davide don’t look good together, I just had to say it.

This gave Davide all the power as he got to decide which girl he wanted to couple up with after 24 hours in the villa.

After a day of flirting with all the girls, it was obvious that Davide had set his sights on Gemma, Tasha and Paige.

But ultimately Davide decided to go with Gemma, leaving her former partner Liam Llewelyn vulnerable as he is now the only single in the villa.

Speaking in front of the fire pit, he explained: “It’s not just attraction, yes she’s a stunning girl. We had a good time and I would like to know her more.

“The girl I would like to couple up with is… Gemma.”

It’s only two days in and Love Island fans have already said that they’re “switching off” the show.

After Davide chose Gemma in the recoupling, fans were left fuming at Davide for picking the wrong girl.

One angry viewer tweeted: “There are so many reasons why Gemma (19) and Davide (27) is an inappropriate match.”

Someone else said: “I HAD TO SWTCH OFF THE TV #Loveisland.”

A third wrote: “Gemma and Davide don’t look good together, I just had to say it. #Loveisland.”

Another fan hoped that Davide will fall for the one of the new arrivals, they said: “Who hopes Davide fancies the new girls more than Gemma…#Loveisland.”