Petronella Wyatt, Boris Johnson‘s ex-girlfriend, appeared on GMB today where she was quizzed by Richard Madeley.

GMB viewers were left cringing when Richard made an awkward comment during the interview.

Between 2000 and 2004, Petronella had an affair with Boris. At the time, he had allegedly promised to leave his wife for her.

However, Boris and Petronella didn’t stay together in the end.

Richard said: “If he wasn’t married, if he was single and if you weren’t involved with anybody could you see yourself going out with him? You don’t have to answer.”

She awkwardly replied: “I am not going to answer that. I may be engaged already. I’m really not answering that,” as she laughed.

However, Susanna Reid stepped in and changed the conversation.

Earlier in the interview, Richard had speculated Petronella “loved” with the PM when they were together.

Meanwhile, on Twitter, viewers slammed Richard for his questioning.

One tweeted: “Imagine asking Petronella Wyatt what she would do if Boris wasn’t married? OMG Richard Madeley do you do research? #GMB gutter TV!”

“Stop putting words in her mouth,” said a second. 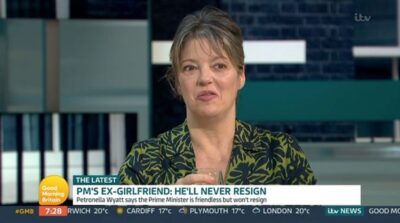 Petronella Wyatt quizzed about her feelings towards her ex, Boris Johnson (Credit: ITV)

Elsewhere in the chat, Richard continued to probe Petronella. He asked if she thought Boris appears “thin-skinned” when it comes to criticism.

“Surprisingly thin skinned yes,” she replied. “Surprisingly sensitive, easily upset by criticism or the thought that people dislike him.”

Meanwhile, she continued: “He has a very soft core. I think this would be absolutely hell for him in private. I don’t think he’s sitting down with a stiff drink thinking, ‘Everything will be alright I’ll tough it out.’

“He’s a bit of an enigma and I think people have the wrong impression of him.”

However, as a result, Susanna then replied: “You sound like you have a soft spot for him still…”