Silent Witness on BBC One: Will Liz Carr ever return as Clarissa?

Silent Witness on BBC One: Will Liz Carr ever return as Clarissa?

Silent Witness returns with an epic 25th anniversary series this year – and some fans would LOVE to see Clarissa return for it.

Sadly she left the longest-running crime drama at the end of series 23 in 2020.

But, as Silent Witness celebrates its special birthday, is there a chance Liz Carr could return as Clarissa?

Why did she leave, and what is she up to now? 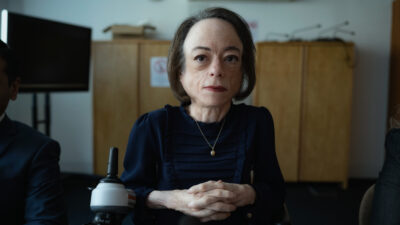 Liz Carr recently portrayed Tina in the brilliant black comedy This Is Going to Hurt (Credit: BBC One)

Read more: Alfie Boe’s marriage –  who was his wife and what happened?

Will Liz Carr ever return to Silent Witness as Clarissa?

Sadly, there is no news of an imminent return for Liz Carr’s character Clarissa to Silent Witness.

We wish we could bring you better news!

For the moment, actress Liz Carr is busy filming other TV shows.

However, the BBC crime drama DID leave the door wide open for Clarissa to return one day.

Unlike others before her – Jason Wong’s character Adam Yuen, Richard Lintern’s Dr Thomas Chamberlain, and William Gaminara’s Leo Dalton – Clarissa did not suffer a dramatic death.

So we’re hopeful we’ll see her again one day.

After all, Amanda Burton is returning as Sam Ryan after 18 years away!

Liz Carr played Clarissa Mullery for eight series of Silent Witness, from 2013 to 2020.

At the end of series 23, Clarissa told her colleagues that she was leaving to “focus less on the dead and more on the living”.

When Liz announced her exit, she said in a statement: “After eight years of getting to play the fabulous character Clarissa Mullery, I’ve decided it’s time to leave Silent Witness.

“To quote Clarissa, ‘I just know, deep down – that it’s time for me to move on, to focus less on the dead and more on the living. On life.’

“Silent Witness has given me such an amazing opportunity to develop as an actor.

“But I know this is the right time to take a leap of faith, leaving what I know and seeing what other opportunities await.

“It has been a rollercoaster of a ride but I feel I’m leaving on an exhilarating high.”

And, in an interview with Radio Times, she said: “I wanted experiences – in travel, wanderlust and activism.

“In a way security comes less high up for me in priorities than experiences.”

Actress Liz, now 50, also admitted that she’d started to “resent” the filming schedules on the show.

She said: “Silent Witness took nine months a year, so it did cut out an awful lot of projects that I would have loved to do.

“I was starting to almost resent that, because I wanted to do other things.” What did Liz Carr say to fans after leaving Silent Witness?

When series 24 returned without the popular character, fans mourned collectively on Twitter.

In response to the fans, actress Liz tweeted her own thoughts on the show.

“In the meantime, Clarissa & Max send their love – all the way from Eastbourne.”

Of course, Liz’s character Clarissa moved to the seaside resort with her husband Max.

What is Liz Carr up to now?

Since leaving Silent Witness, Liz Carr has appeared as herself on the 150th episode of Who Do You Think You Are? and Would I Lie To You?

Her first acting role after leaving Silent Witness was as a lecturer in the brilliant TV series Devs.

Liz went on to play Meg in CripTales, and Garrick in the 2021 film Infinite alongside Mark Wahlberg.

The same year, she landed a role in Netflix’s fantasy series The Witcher.

She played Fenn in the second series, opposite Henry Cavill and Freya Allen.

More recently, she played Tina in the brilliant black comedy This Is Going to Hurt, and Liz in the TV movie Then Barbara Met Alan.

She stars as Saraqael in the 2022 second series of Good Omens, which stars David Tennant and Michael Sheen.