Naga Munchetty accused BBC Breakfast co-host Charlie Stayt of ‘ignoring’ her on the show today (May 14).

The moment came about as Charlie stepped outside the studio in Manchester where Breakfast is filmed.

He strapped on a helmet and straddled a bike for a segment about cycling.

But as the item concluded, Charlie rode off into the distance as Naga pondered whether he would return. 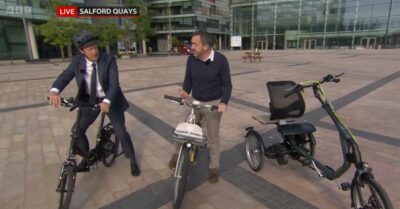 Charlie had suggested “tootling off” for a coffee with his interviewee.

Naga, 47, responded by pretending to be exasperated by her colleague teasing he was leaving work early.

“Er, no Mr Stayt,” she objected in mock-annoyance.

“Mr Stayt, you’re due back in the studio,” Naga continued as Charlie cycled away.

Clearly joking, she muttered: “He’s ignoring me again. Again ignoring me. Can someone just go out and get him please?”

Naga continued her gag: “Look, look at that. It’s ridiculous. Seriously, he’s still got one and half hours of broadcasting to do.” 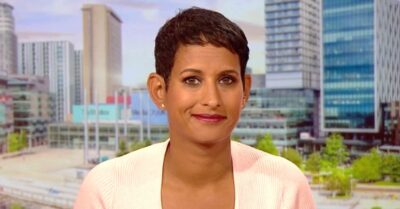 Naga appeared in the studio by herself (Credit: BBC iPlayer)

She even huffed in disgust as she repeated her request for a crew member to chase after Charlie.

“I’m going to get someone to get Mr Stayt back to the studio,” she reassured viewers, still referring to her co-host excessively formally.

How BBC One viewers reacted on social media

The moment didn’t go unnoticed with viewers at home.

And it appears that Naga can never, ever win with some people on social media!

One such unimpressed observer claimed on Twitter: “Naga Munchetty having a right old diva-style meltdown #BBCBreakfast.”

Meanwhile, a second failed to see the funny side to Naga’s joke and poked fun.

Naga Hagger flogging a dead horse of a “joke”#bbcbreakfast