On Loose Women today, Kaye Adams come under fire for appearing to ‘defend’ Rebekah Vardy over her controversial comments about Peter Andre.

Loose Women viewers were not happy with Kaye and took to Twitter. 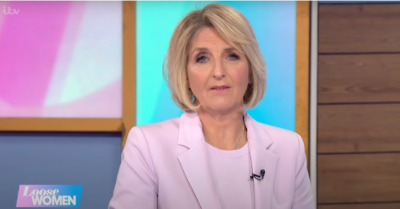 Back in 2004, in an interview with the News of the World, Rebekah compared Peter’s penis to a “chipolata” sausage.

In the same article, she described the singer’s manhood as a “small chipolata, shaved, slobbery, lasts five minutes”.  18 years on and Rebekah has apologised for her comments – which resurfaced due to the ongoing ‘Wagatha Christie’ trial.

During Loose Women today, the panellists discussed Rebekah’s comments and whether jokes about people’s looks are “bullying or banter”.

Linda Robson was firmly in Peter’s corner, saying that Rebekah should be “ashamed” of herself. She said that if the roles had been reversed, it would still have been “disgusting”.

However, Kaye didn’t fully agree with her fellow panellist. 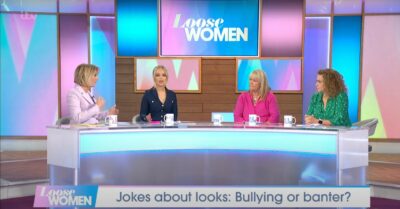 Kaye seemed to argue that making derogatory comments about appearances is part of “lad culture”.

She argued that a lot of humour tends to be about people’s appearances.

She went on to say that men used to just be expected to take comments about their appearance and laugh it off.

“Now that’s beginning to unravel and that’s a good thing,” she said.

She then went on to argue that joking about someone’s appearance isn’t funny and is “low brow” humour.

Kaye also said there will be people who will say ‘Oh for God sake it’s a joke, don’t be a snowflake’, adding: “Men are going to have to have real open conversations.” 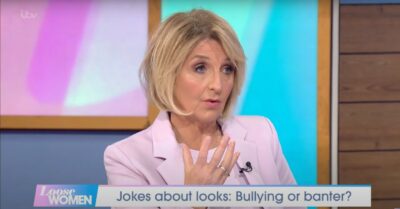 It’s safe to say that viewers of Loose Women were not happy with Kaye and the other panelists seemingly defending Becky’s comments.

Plenty took to Twitter to slam the 59-year-old and her fellow panelists.

“They always defend the wrong people,” another said.

“As always they defend the person who is wrong,” a third groaned.

“So I take it Loose Women are supporting Rebekah Vardy in this. Because she was a loose woman once upon a time…,” another tweeted.

Loose Women airs on weekdays from 12:30pm on ITV and ITV Hub.