Kate Garraway has been slammed by Good Morning Britain viewers following an interview she hosted with Ben Shephard during today’s show (Friday, January 14).

Viewers of the show accused Kate of interrupting and “talking over” her co-host, Ben, and guests at numerous points throughout the interview. 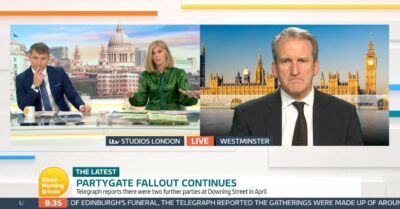 Kate and Ben’s interview was slammed by viewers (Credit: ITV)

Ben and Kate welcomed Damian Hinds, the Security and Borders minister, onto the show today.

During the MP’s appearance, Kate and Ben asked him about “Partygate”. Further details have emerged overnight that there were reportedly even more parties hosted at 10 Downing Street during lockdowns. One party allegedly took place the night before Prince Philip‘s funeral in April.

Kate asked Mr. Hinds about the impression of there being “one rule for one and one rule for another” within the government.

“Yeah, I understand what you’re saying,” Mr. Hinds said. “I understand and absolutely acknowledge people’s disappointment, let down, anger. I mean, the Prime Minister said that on Wednesday when he made his apology.”

“But what have you done about it since hearing is my point,” Kate said, interrupting Mr. Hinds.

As Mr. Hinds explained that Sue Gray would be investigating the parties, Kate interrupted again.

“So, they’re definitely going to be looked at, are they?” she asked, silencing the MP again. 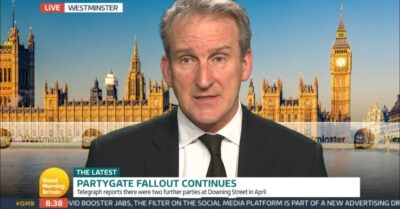 The 54-year-old presenter continued to question the MP, whilst her co-host Ben sat to one side in silence.

Eventually, he got a chance to speak.

“There is a lot of pressure on Sue Gray, isn’t there, like Kate said, it’s mounting,” he said. He then went on to say that it’s unfortunate that it’s Mr. Hinds who has to defend the government’s parties, despite not even attending.

Kate’s continued interruptions eventually started to get on the viewers’ nerves. 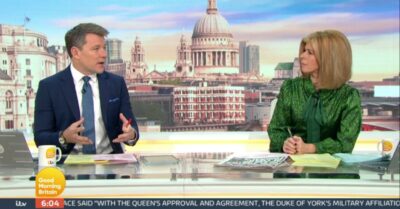 GMB viewers were not happy with Kate’s interviewing and interrupting on today’s show. Many took to Twitter to complain about it.

“Interrupted Ben a few times too. Wasn’t a good interview,” one said.

“Kate why so rude this morning? Stop taking over Ben we want to hear his opinions not just yours,” another said.

One viewer seemed to be enjoying Kate’s interviewing techniques today though!

What did you think of Kate’s interruptions on today’s show? Leave us a comment on our Facebook page @EntertainmentDailyFix and let us know.