The chilly statues were created by sculptor Jamie Hamilton who joined Holly and Phillip in the studio.

Holly, 40, asked Jamie how long it took him to make the models. 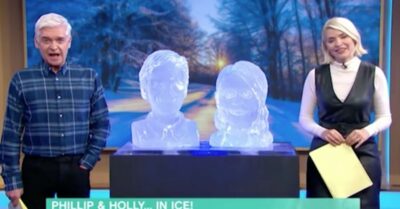 He replied: “Each one takes about two days, and that’s a process of researching it, sketching and then after that doing the sculpting itself.”

Phillip then asked the artist how long it would take for his creations to melt.

Jamie said: “Surface details melt off in about two or three hours, but actually for that to melt away to nothing, 24 hours or more.”

But while Holly and Phillip seemed impressed by their icy likenesses, viewers were not so impressed.

They took to Twitter to point out that the ice sculptures would be better suited to Halloween than Christmas. 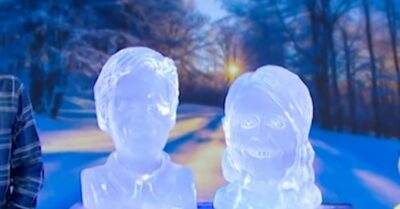 This Morning viewers were in hysterics on Twitter (Credit: ITV)

And it was poor Holly who seemed to come off slightly worse.

“OMG…. just seen an ice sculpture of Holly Willoughby…. this is something you would see at Halloween!!” tweeted one shocked fan.

Another said: “My God those ice sculptures, I was in tears, especially Holly’s.”

A third posted: “Holly’s ice sculpture is incredible…” along with a photo of the demon child from The Exorcist.

Someone else quipped: “When you order your ice sculpture from wish.com.”

“The pics of Ice Holly are getting closer and closer and it’s starting to scare me,” another watcher said.

Meanwhile, someone else said: “Ice sculpted Holly Willoughby is the stuff of nightmares. I don’t believe for one second she was happy with that!”

OMG…. just seen an ice sculpture of Holly Willoughby…. this is something you would see at Halloween!!

She’s got to be happy with that, it’s looks like a Screamer #ThisMorning

#ThisMorning
My God those Ice Sculptures, I was in tears, especially Hollies 🤣🤣🤣🤣

When you order your ice sculpture from https://t.co/AKa3IUXekK #ThisMorning pic.twitter.com/oKxfZkNFkg

Ice sculpted Holly looks like she really wants to tell us of all the traumas she’s witnessed… #ThisMorning pic.twitter.com/J2lkQpKDi2

Phil and Holly Willoughby managed to keep their real faces straight for once as they were presented with the incredible recreations on This Morning. 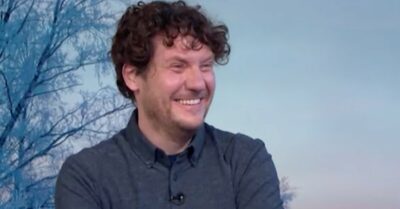 Phillip said: “Created by the fantastic team whose work is currently on display at the Ice Kingdom in Hyde Park’s Winter Wonderland.”

What did you think of the frozen faces? Leave us a comment on our Facebook page @EntertainmentDailyFix