GMB director Erron Gordon was in tears on his final day before he leaves to join Piers Morgan on his new talkTV show.

Hosts Susanna Reid and Ben Shephard led a tribute to the director, leaving him sobbing behind the scenes.

What did the GMB hosts say about Erron?

‘We wanted to put his name up in lights.’

It was a significant day for GMB this morning (Thursday 25 November) as long-standing director, Erron Gordon left. Erron had been working on the show since it first aired in 2014, and had been at ITV for 13 years. It was an emotional morning for the director to say the least.

Back in August, Erron announced that he was leaving the show to ‘take on an exciting new challenge’. The ‘challenge’ in question is working on Piers Morgan’s new global daily talkTV show.

Today was Erron’s last day, and the GMB team made sure he knew how appreciated he was.

“We are sending off our director, Erron Gordon,” Susanna said on GMB this morning.

“He’s been with us since the very beginning,” Ben said.

What did GMB do for Erron to say goodbye? 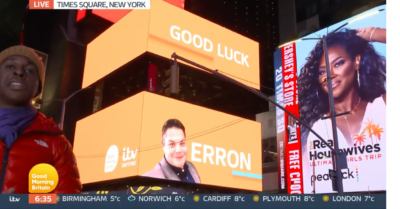 Ben went on to say how proud they were of what Erron had managed to do on GMB over the years. They then spoke to Andi Peters, who was at Times Square in New York.

Speaking about director Erron, Andi said: “Some would say he’s one of the best news directors in the world. I would say that because a) he’s my friend, and b) we’ve all worked with him since day one when Good Morning Britain started.”

Read more: Piers Morgan snaps back as Adil Ray ‘takes swipe’ at him on GMB today

Andi then went to stand in front of a massive billboard on the Cube in Times Square.

He continued: “Do you know what, most directors are only really famous when they have their names up in lights here in Times Square, and that is what I thought we needed to do for Erron.”

The camera then cut to Erron sitting behind the scenes, who had started to cry. 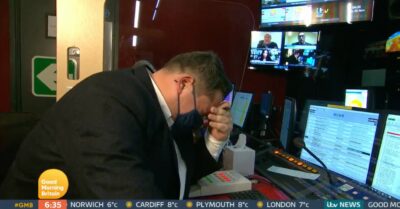 The moment proved too much for GMB director Erron Gordon (Credit: ITV)

“That’s what he deserves,” Andi said as the screen behind him changed to show a picture of Erron. The picture was captioned “Good Luck Erron”.

The moment proved to be too much for the GMB director, who sat sobbing at his desk watching the show.

“The Cube is showing to every tourist who’s here now Erron’s face,” Andi said as Susanna and Ben burst into laughter. A tearful Erron turned to the camera and gave it a thumbs-up as the cast and crew gave him a round of applause.

He then joked they had “broke” him as he composed himself.

What did Piers Morgan have to say? 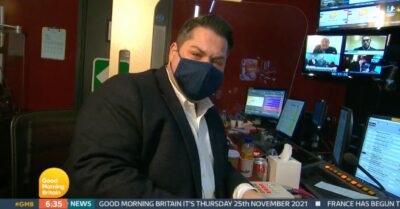 Ex-GMB host Piers quoted the video of Erron’s surprise on his own Twitter.

“Brilliant! And no less than this masterful director deserves after all he’s done for GMB,” the 56-year-old tweeted.

“Congrats @errongordon – I can’t wait to work with you again on my new global show,” he added gloatingly.

Piers left the show a few days after the interview. He was cleared of any wrongdoing by Ofcom in September.

His new show on talkTV will feature other presenters including Rob Rinder and Julia Hartley-Brewer, and is expected to launch in early 2022.

What did you think of Erron’s surprise on GMB?  Leave us a comment on our Facebook page @EntertainmentDailyFix and let us know!