This Morning hosts Alison Hammond and Dermot O’Leary divided fans of the show when they made an exciting announcement on the show today (October 15).

With Holly Willoughby and Phillip Schofield taking a well-earned break next week, Ruth Langsford and Eamonn Holmes were expected to take over the reins.

However, an excited Alison and Dermot revealed that they’ll be presenting the show all week instead.

The announcement came when they duo were signing off on the show today.

However, not everyone seemed pleased with the news, with some viewers expressing their displeasure with some Twitter grumbling. 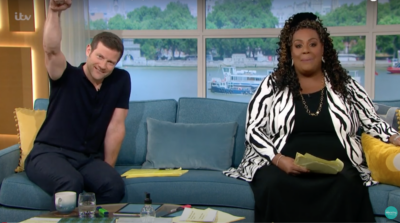 It’s good news for Alison and Dermot fans tuning into This Morning next week (Credit: ITV)

What did This Morning fans say about Alison and Dermot?

Ruth and Eamonn’s loyal fan base were out in force and some said they felt “cheated” that they wouldn’t be covering the regular hosts over half-term.

Of course, Ruth and Eamonn did stand in over the summer holidays, and many expected them to do the same next week.

However, earlier this week ITV announced that Alison and Dermot would be on five days a week while Holly and Phil took their break.

“We’ve been cheated! Holiday time should be Eamonn and Ruth not these two!” slammed one.

“Totally agree with you it should be Eamonn and Ruth and not these two,” agreed another.

Some said they can’t watch when the pair are on, though (Credit: ITV)

‘Saves me tuning in next week’

Some fans of This Morning even went so far as to say they’d be switching off next week.

They declared they “can’t watch” when Alison and Dermot host the show.

Of course, they are regular Friday hosts, so what they were doing tuning in today is anyone’s guess…

Their post read: “Saves me tuning in next week. Can’t watch when it’s these two.”

This Morning viewers call for more Alison and Dermot

However, others admitted they love Alison and Dermot on the show and hoped it led to more days in front of the This Morning cameras for them.

One said: “Much prefer these two presenting.”

Another added: “Great! I hope you’re on the week after too when I’m off work!”