This Morning fans were all saying the same thing as diver Tom Daley appeared on the ITV sofa today (October 14).

Olympic gold medal winner Tom joined hosts Philip Schofield and Holly Willoughby to chat about knitting, the Games, his new book and everything in between.

However, viewers at home didn’t seem to be listening to Tom’s tales.

Instead, all they focused on was the star’s appearance. 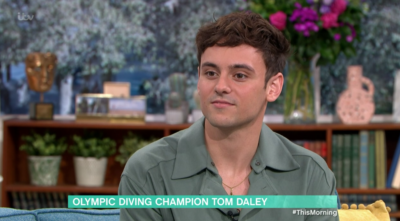 What did ITV This Morning viewers say about Tom Daley?

Tom wore a khaki jumpsuit and trainers on the show and, we have to admit, he looked pretty dashing.

However, This Morning viewers at home wondered if perhaps Tom had undergone a career change – or if he was considering one.

“Is Tom working in the local car garage after his appearance on #ThisMorning?” asked one viewer.

“Tom’s looking for a role in EastEnders working in The Arches later,” quipped another.

“Is Tom Daley a mechanic now??” another joked.

“Has he come straight from a shift at Kwikfit?” another commented.

“Has Tom been fixing a boiler?” another asked.

“Is Tom Daley working as a maintenance man now?” said another.

“Tom’s off to his painting and decorating apprenticeship after the show,” said another, offering up another career option for the sportsman. 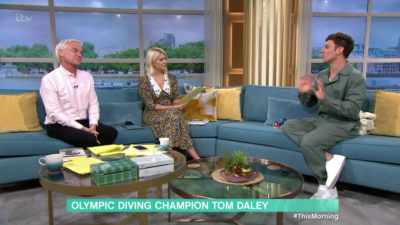 What did Tom say about parenthood?

During Tom’s interview, he also spoke out about the abuse he’d received after announcing that he’d become a father.

He and husband Dustin Lance Black are proud parents to Robbie, who is now three.

However, what should’ve been a happy time for the parents was marred by trolls.

“We thought announcing our baby was going to be a happy occasion for us and it was but there were some opinions that weren’t really happy about same-sex parents and surrogacy.”

He added that “what upset us the most” was son Robbie will one day be able to go back and see all the trolling his parents endured.