The Queen looked pretty in pink as she visited Wales today (October 14) with Prince Charles and Camilla, Duchess of Cornwall.

Her Majesty wore a pink double-breasted coat and matching hat adorned with flowers for her first visit to Wales in five years.

Her outfit was completed with black shoes and gloves, pearls and a Welsh daffodil brooch.

For the second time this week she used a black walking stick to steady herself.

Could her choice of colour palette have been a nod to October’s annual Breast Cancer Awareness month?

Maybe, or perhaps it was just a lovely coincidence. The Queen was pretty in pink in Cardiff today (Credit: Tim Rooke/Shutterstock)

Why was The Queen in Wales?

The Queen was attending the sixth ceremonial opening of the Welsh Parliament, also known as the Senedd.

Real reason: The real reason why the Queen will never abdicate ‘revealed’ as she head for 2022 platinum jubilee

The Prince of Wales and his wife Camilla also attended the event in Cardiff.

Her Majesty addressed Parliament in the Senedd Chamber.

She paid tribute to all those working tirelessly during the challenges faced during the global pandemic.

In her address the monarch said: “The Welsh people have much to be proud of.

“Over the next five years, I am sure you will continue to be inspired by their indomitable spirit, as you represent the interests of Wales and its people.”

Read more: The Queen stuns in bold orange outfit as she hosts event with Prince Edward at Buckingham Palace

She also praised the Welsh Parliament for holding the first virtual Government meeting during lockdown.

During the visit the Queen met the First Minister of Wales, Mark Drakeford, and Welsh party leaders.

After the event she was seen laughing and smiling as she spoke with members of staff outside the building. 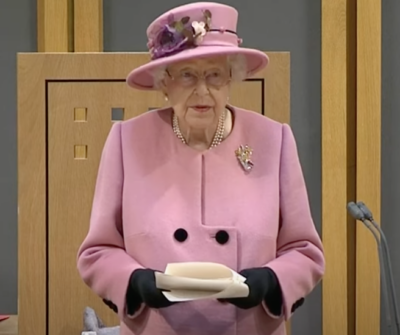 The Queen gave a speech to Welsh Parliament (Credit: YouTube)

Royal visit to Wales – with the Prince of Wales

Duchess of Cornwall Camilla looked striking in red, while Prince Charles wore a grey suit for the visit.

However, all eyes were on the monarch and just how lovely she looked after the royal family shared pictures of the visit on social media.

The Queen, The Prince of Wales and Duchess of Cornwall attended the Opening of @SeneddWales this morning.

Her Majesty and Their Royal Highnesses met the @fmwales and Welsh party leaders before The Queen addressed Members of Welsh Parliament in the Senedd. pic.twitter.com/jH2gjBMQEW

Fans took to social media to share their views on how lovely the 95-year-old royal looked.

One fan said: “Always serving a perfectly matched look. I’m surprised she doesn’t have walking sticks in different colours too! I’d definitely use a pink one!”

Another added: “The queen in pink, it really suits her, as does red on the Duchess of Cornwall.”

While a third said: “Just love the Queen in pink. She’s glowing!”

Fans also praised her use of a walking stick, saying: “I’m glad to see the Queen is using a walking stick. It’s not a sign of weakness or fragility but a sensible decision.”

What do you think of the Queen’s outfit? Let us know over on our Facebook page @EntertainmentDailyFix