Guilt returns to BBC Two but which cast are back and who else has joined?

Guilt returns to BBC Two but which cast are back and who else has joined?

Guilt makes a very welcome return to BBC Two tonight with a second four-part series and a stellar cast.

And there are some new as well as familiar faces. For a refresher on all the drama from series one, read our full recap here. 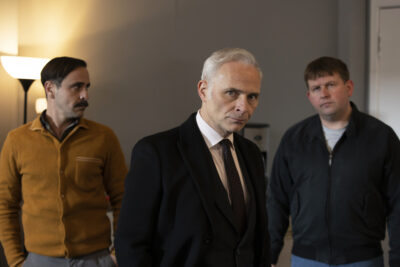 Max (Mark Bonnar) is out of business and ready to cause more mischief (Credit: BBC)

Smooth and slippery lawyer Max has just come out of prison after being found guilty of the manslaughter of the old man that kicked off series one of Guilt.

He is out quickly – having served just two years – but his freedom is all he has. His wife has left him and he no longer has the big house, the successful career, and the side line in money laundering.

And his brother Jake is nowhere to be seen, having left the country at the end of series one. So in an attempt to get his life back on track he teams up with

Kenny (Emum Elliot) to form a legal practice – using Kenny as a ‘front’ of Max’s legal know how.

Mark Bonnar says Max is mounting a comeback: “I think his outlook is quite bleak to begin with but Max is a survivor, if anything else.

“And he is very clever and knows how to manipulate situations to his advantage so he won’t be on his uppers forever.”

Single since his wife left him, he becomes involved with Erin ( Sarah Vickers), the daughter of king pin gangster Roy Lynch – definitely a high stakes relationship.

“What I enjoy about playing Max the most is that he can turn on a sixpence if the situation requires and that’s a very sexy, devilish quality we all admire and sometimes take a short intake of breath and a little gasp to admire and even though he’s really kind of naughty,” he adds. “That’s what we like about him.”

Scottish star Mark Bonnar is one of the UK’s most recognisable telly faces – starring in Line of Duty, Catastrophe and Unforgotten.

The 52 year old is married to fellow thespian Lucy Haskell and they have two children.

A newcomer to the Guilt cast on BBC Two is Stuart Bowman. Stuart has stepped into the shoes of Bill Patterson (who played Roy in series one) to bring to the screen one of the most sinister gangsters in TV drama history.

An old school Edinburgh enforcer, Roy is separated from his wife Maggie and estranged from his daughter Erin, although she is forced to turn to him in her hour of need.

Speaking about the on screen family,  Roy says: “I  mean, they’re all pretty bold people. There’s a lack of fear amongst all of them.

“And the scariest people in my experience are folk who are just not scared of consequences.

“You see that in people’s eyes, and I think the whole family has got that steel, and we see elements of throughout the series of that steel coming out.

“But also you also see the justification for that steel and then it makes sense.” 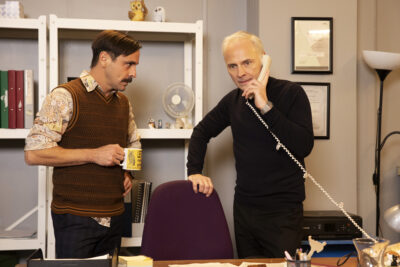 The Kenny of series two is a very different character to the booze-addled private detective introduced in series one.

He has retained his penchant for slightly unusual 70s style fashions – but otherwise he is a changed man – two years into a life of sobriety, and regularly attending AA meetings.

Although his wife has left him he is once again seeing his children. He’s studied for an HND in legal services and is running his own business – which is where Max seems the opportunity to inveigle his way in.

And it’s at one of his AA meetings that he meets Yvonne, and the pair form a passionate attachment (despite AA rules banning dating between members).

Emun Elliot says: “I’m not very similar to Kenny at all. However, I can empathise with him on all fronts.

“We all know what it’s like to feel betrayed and look up to certain people who are perhaps not the greatest influence. We all have demons that we wrestle with on a daily basis.

“So, although the specifics of Kenny’s struggle are very different to my own – I can relate to him in a broader sense. Kenny is a kind man. I hope my friends would say the same about me!”

We first see Yvonne at an AA meeting, where she meets Kenny.

A police detective, she initially moved to Edinburgh to be with her now ex-husband, but with the end of her marriage she found her drinking spiralling out of control, as she tried to cope with her loneliness.

Denied the promotion that should have been rightly hers, she is also now forced to work with her smarmy ex-husband, who uses the knowledge of her drink problem as a weapon to control her.

Smart and streetwise, she’s a brilliant detective. And while her divorce has left her heart bruised, she hasn’t given up on love – as is shown by the sweet romance that develops between her and Kenny.

Rochelle Neil says: “So we meet her as a woman with many secrets, trying her best to make amends.

“Yvonne has so far been a bit of a lone wolf. I’d be interested to see why she didn’t just head back to London after her divorce. Maybe she’s running from more than we think.” Intriguing!

Rochelle Neil, a graduate of the Italia Conti theatre school, starred as Annie Carbey in HBO hit The Nevers and Sky’s Das Boot. She lives in London. 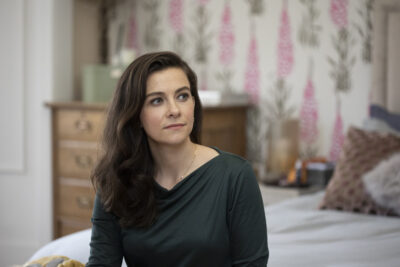 When we first meet Erin she is hosting a dinner party with her husband, who is celebrating his recovery from cocaine addiction.

However, drama being drama, it’s not long before things take a very dark turn, and Erin must turn to her father, gangster Roy Lynch, for help.

It’s an indication of how desperate she has become as she has turned her back on her father, repelled by his dubious activities, and also, holding him responsible for the car accident that left her mother in a wheelchair.

Sarah Vickers says: “The upbringing she had has always been a little murky – there were always things going on.

“She knows her dad has been up to no good, which is obviously why she has taken a sidestep from him.

“We kind of meet her at a point where she’s trying to make amends for all that, make her own life.”

Devoted to her mother Maggie, she becomes attracted to Max, initially unaware of his links with her father. 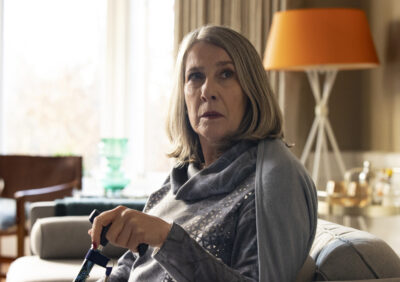 Maggie is something as a wolf in sheep’s clothing (Credit: BBC)

The Guilt cast on BBC Two is also joined by Phyllis Logan. When we first meet Maggie she seems like a sweet little old lady – but of course appearances can be deceptive.

The estranged wife of gangster Roy Lynch, she is close to her daughter Erin (Sarah Vickers), who is particularly protective of her mother as she is now in a wheelchair after a car accident many years ago.

Maggie lives in an upscale sheltered accommodation where Erin is a regular visitor.

Read more: The 3 key questions we need answering after episode 3

But Maggie is hiding her own secrets, as Phyllis explains: “It’s not as if you hone in on Maggie or her character straight away. She’s just there.

“But then slowly she becomes more part of it. And we learn a bit more about her.

“It would seem to be this is her life but there are undercurrents. And, there may be, as in everybody’s life, a few secrets but that applies to practically everybody in this show.”

The 65-year-old actress has also starred in Lovejoy and Secrets and Lies. Her husband is actor Kevin McNally and they have one son, David.

All four episodes of Guilt are available now on BBC iPlayer if you can’t wait to watch the whole series.

Let us know what you think of the new series of Guilt cast on BBC Two by leaving us a comment on our Facebook page @EntertainmentDailyFix.